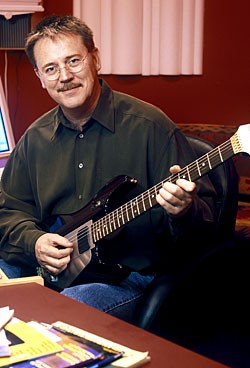 A gigging guitar player who by day made turquoise jewelry, like most players in the early/mid 1970s, Floyd Rose was hugely influenced by Ritchie Blackmore and Jimi Hendrix – especially the way their technique employed their instruments’ vibratos. But like his heroes, he knew that getting too busy on his Strat’s stock “trem” meant following up by turning a lot of tuning keys.

In the late ’70s he conceived a new style of vibrato bridge that locked the strings in position behind the guitar’s nut, helping them stay in tune even when the player was very aggressive with the vibrato. On a bench mill he trained himself to use, he made tooling for wax-casting the vibrato’s parts, and built the prototypes himself.

The first player to see one of the vibratos was renowned Hendrix impersonator Randy Hansen. Rose told him, “This is one guitar that even you can’t put out of tune, Randy!” Up to the challenge, Hansen proceeded to throw what Rose remembers as “a raging whammy bar assault” on the guitar. When he was done abusing it, he looked up at Rose with a grin, grabbed an E chord and strummed. The guitar was still perfectly in tune. Hansen’s mouth fell agape as he looked at the guitar, then Rose, in disbelief.

“He then launched into the most violent whammy bar attack I’d ever seen,” Rose said, recalling the event after being told of his entry into the VG Hall of Fame. “He threw the guitar into the air, caught it by the bar and shook it unmercifully, then threw it to the ground and began stomping on the bar with his foot, producing deep, howling dive bombs.”

Finally finishing his abusive romp, Hansen put the guitar’s strap over his shoulder and made another E chord. Again, it was still perfectly in tune.

“He looked at me again with his mouth wide open then said ‘I’ve got to have one of these!”’

Knowing he was on to something, Rose sallied forth. In early 1977, he filed a patent, and with the help of favorable ink in the form of a review in Guitar Player, things started to move.

“My pitch was to play a chord to show it was in tune, then launch into a few whammy bar tricks, doing deep dives that made all the strings go completely slack – which couldn’t be done by any other trems – then I’d play the chord again to show it was still in perfect tune. The reaction from guitarists was always the same – their jaws dropped in disbelief, and they began to laugh.”

One player who got an early Rose vibrato was Eddie Van Halen, who liked it enough to endorse and promote it. As luck would have it, superstardom awaited him, and the Floyd Rose vibrato went along for a ride that saw Van Halen become the predominant player in an era where virtually every virtuoso player made the locking vibrato a predominant element of their playing styles.

The next big step for Rose came in ’82, when he made Kramer Guitars the exclusive distributor of the Floyd Rose Locking Tremolo. As the ’80s progressed, heavy metal became the dominant form in rock and roll; most metal guitarists played customized “superstrat” guitars – and most of them were equipped with what become ubiquitously known as simply “a Floyd Rose” or better, just “a Floyd” (as in “Yeah, man, it’s got a Floyd!”). Featured in Kramer ad campaigns that ran in high-profile publications of the era, Rose’s face became as recognizable as some of the players who endorsed Kramer guitars and “Floyd” vibratos.

“Today, my face isn’t recognized in day-to-day life. But often, like when I pay for something with a credit card, they recognize the name,” Rose said. “When they do, they invariably say ‘Are you the real Floyd Rose?’ It always makes me laugh to think that so many people, who are often not guitar players themselves, recognize the name.”

In 1989, Rose introduced the Pro, a lower-profile version of the vibrato developed for Kramer’s ProAxe guitars. But the bell was tolling for heavy metal, and the succeeding wave of rock music saw guitarists revert largely to guitars with solid bridges and tailpieces. Much like the superstrat, dive-bombing, rack processors, and two-handed tapping, the Floyd fell out of favor.

But Floyd Rose, the man, wasn’t done having an impact. In the early ’90s, Fender began using original-style Floyds on a version of its Classic Stratocaster and the upscale Set-Neck Floyd Rose Strat. In ’98, Rose teamed with Fender to design the Fender Deluxe Locking Tremolo, and in 2004 Rose launched his next innovation – the Speedloader string-changing system, which allows an entire set of guitar strings to be changed in one minute, as well as a line of guitars and proprietary strings that utilize the system.

“I have a few new fixed bridge designs I’m working on,” Rose says of his current doings. “One of them is for doing rapid tuning changes using interchangeable tuning cassettes. Another is a Speedloader bridge that can use Standard strings, Speedloader strings, or a combination of the two.”


This article originally appeared in VG‘s December 2008 issue. All copyrights are by the author and Vintage Guitar magazine. Unauthorized replication or use is strictly prohibited.
Current Issue