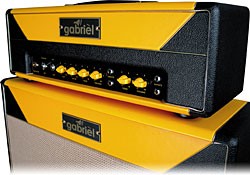 The Gabriel Sound Garage Voxer 18 guitar amplifier is a tonal hybrid based on Marshall’s mid-’60s 18-watt amps and the Vox AC15. An all-tube/hand-wired amp built solely by Romanian emigré (now official American citizen) Gabriel Bucataru, the Voxer is a positively artful-looking labor of love built by a guy who is dedicated to re-creating classic tones at an output level that won’t cause either of two conditions – hearing damage and marital strain – common among electric guitarists.

As a boy in Romania, Bucataru began tinkering with electronics (and playing guitar) at an early age. Early on, he developed an appreciation for the British amp tones used by his favorite artists. In his homeland, Western-made amps were scarce, so Bucataru never had the chance to actually play a classic until he moved to the U.S. in 2000. Upon the shores of his new home, however, he did indeed play some, and more importantly grew downright glutinous in his gathering of information on amps, their sounds, and how to build them. His primary source of data was the assortment of amplifier discussion forums frequented by enthusiasts on the internet. Bucataru happened upon one such board that focused on moderately-powered amps. His time spent there, reading and contributing content, eventually led to a three-year stint as site administrator. Today, the forum is called 18watt.com, and Bucataru is a full-time amp builder.

Bucataru’s Voxer 18 is a two-channel, low-powered head. The first channel uses one 12AX7 preamp tube and, with voicing based on Marshall’s mid-’60s model 1974, known far and wide as an “18-watt” (last month we reviewed Marshall’s reissues of the 1974 and model 2061). The Vox AC15-based second channel uses an EF86 preamp tube and features controls for Volume, Tone, and Gain, and its own set of High and Low inputs. The channels share one 12AX7 phase inverter, two EL84 output tubes, and a EZ81 rectifier tube.

We tested the Voxer 18 using a stock 1959 Fender Esquire, 1970 Fender Stratocaster, and a ’70s Ibanez Artist. Plugging in the Esquire, we set the Voxer 18’s Volume low, and Tone and Cut just past halfway, and were greeted with a very nice clean tone with that could be nudged ever-so-subltely into breakup; incredibly warm and sweet, with tight bottom. Very British, with an abundance of sparkly harmonics and great note separation. Pushing the volume produced smooth, warm gain. Rolling off the Tone control and tweaking the Cut helped remove any edginess as we pushed the amp to full volume. Notably, the Voxer never got mushy. It produced a humbucker-like fatness by simply touching up the Tone and Cut controls. 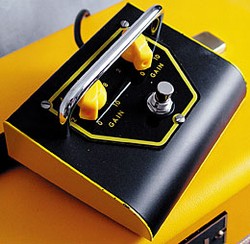 Plugging into the second channel, we pushed the Volume and kept the Gain at about 1/4 (3 on the faceplate), switched the Contour to its most bassy position (setting F) with the Tone and Cut at 7, and got some of the fattest Tele tones you could imagine, incredibly warm and sweet, and always with tight low-end. High-end response was also sweet, with no harshness. The Contour switch does a fantastic job of letting the player adjust the balance between low and high frequencies to dial in the perfect amount of fatty sweetness (or sweet fattiness!). Pushing the gain, we got more vintage Vox-type tones with smooth distortion that always held its ground and never threatened to get soft.

We found the Voxer 18’s Stratocaster tones to be nearly perfect. They stayed fairly clean until we pushed the Volume past 7. Again, manipulating the Cut control let us dial in any degree of sparkle, without sacrificing low-end.

Plugging the Strat into channel two and switching the Contour to D evened out the tone from treble to bass, and gave us a clear, clean Strat tone with nice low-end and smooth sparkle – very warm and punchy. We pushed the Gain and got the desired distortion, again, without getting mushy even as the knob hit 10. As with the Esquire, we easily got humbucker-like fatness by switching the Contour switch to its bassier settings.

To test the Voxer’s clean tones through humbuckers, we ran the Ibanez through channel one, pushed the Tone control to 10, and rolled the Cut control back almost all the way. The sound stayed clean until the Volume hit 3, after which it proffered a bluesy breakup. Pushed harder, and on to all the way, the tone remained tight, with no low-end sag and enough gain to play a sweet blues or rock lead. Throughout the range, the amp was very touch-sensitive.

With the second channel’s Volume at 8, Gain set to 3, Tone on 10, and Cut at 0, we got a gutsy blues breakup that was full, but still sparkled. Pushing the Gain too hard made things a big mushy, but we quickly cleaned it up using the Contour control, which created virtually any degree of fatness. And regardless of setting, the Voxer was ready with plenty of smooth gain, fantastic low-end, and sparkle. The footswitch is an especially valuable tool, and works great for soloing with this channel.

The Voxer 18 is one of the fullest, fattest, warmest-sounding British-style amps we’ve reviewed. Its high-end response is sweet and sparkly, with not a hint of harshness. It produces amazing sounds at real-world volumes, doesn’t play favorites to single-coil pickups or humbuckers, and its imminently usable Contour lets a player fatten things up to their liking.

The Voxer compares favorably or even exceeds the tone of the amps that inspired it, and you can get one at a fraction of the price – though it’ll still set you back in a way we’ve come to expect in today’s boutique amp market. Still, this is an absolute killer.