There’s ample revisiting in Seeds and Stems, Telecaster slinger Bill Kirchen’s third album for Proper America. Five of the 13 songs hearken back to his late-’60s/mid-’70s days with pioneer country-rockers Commander Cody and his Lost Planet Airmen. “Flip Flop,” “Womb To The Tomb” and “Rockabilly Funeral,” are longstanding favorites of his solo repertoire, as is Charlie Ryan’s 1955 “Hot Rod Lincoln,” the 1972 Cody hit he has transformed into a Tele tour-de-force.

Recorded live in the studio during a British tour in June, 2012, he used his touring band – bassist Maurice Cridlin and drummer Jack O’Dell – frequent collaborator Austin DeLone, and a few others. Wife Louise Kirchen did harmony vocals, and Jorma Kaukonen played guitar on “Talkin’ ’Bout Chicken.”

“It’s really songs that have remained in the live set,” he explains. “I enjoy doing them. People forever request them. I can’t tell you the number of times people have requested ‘Mama Hated Diesels.’ I was a little leery at first, cause I know some of them are available numerous other places, but some… weren’t to me, in versions I could get my hands on and have [with me] on gigs. Also, Malcolm Mills, the head guy at Proper Records, thought it would round out my three Proper albums nicely.”

Word To The Wise, Kirchen’s previous album, emphasized duets. Seeds, he adds, “…is the canon kind of record. Plus, you know, it was fun to hear how some (songs) changed over the years. I just went back and listened to Bobby Black playing on the original (Cody) ‘Semi-Truck.’ And man, Bobby was so great, but that’s what I wanted to do – record with the current band, the way we do ’em today.”

He did likewise with the autobiographical “Flip Flop,” referencing his youthful encounters with the Stanley Brothers, Buck Owens/Don Rich, and Professor Longhair. “I just picked three people. They weren’t necessarily the three most important people, but three who had made a big impression on me who are gone.” The rhythm was inspired by an LP of New Orleans R&B on Minit Records he bought as a teenager, what he calls “that New Orleans funky drum thing. Our drummer’s good at that and he doesn’t really get a chance to do it much.” 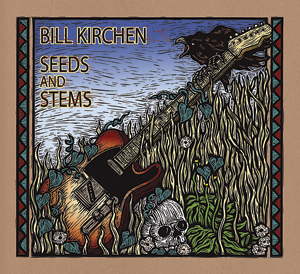 The original “Tell Me The Reason” was likewise rooted in tradition. “I wrote that with a bass player, Jeff Sarli, and my wife Louise. We were just thinking ‘straight country shuffle.’ Ray Price was the benchmark for that stuff. It doesn’t have a fiddle or a steel, but we certainly were trying to catch that groove.”

Kirchen explains how important it was to properly perform the Cody country tunes, which were witty yet respectful of country tradition. “The spirit of that band is kind of hard to put your finger on,” he explains. “We had a sense of humor, but it wasn’t too tongue-in-cheek. (Vocalist) Billy C (Farlow) and George (“Commander Cody” Frayne) tried to write a straight country weeper with ‘Seeds and Stems,’ and I tried to sing it like that. I hope I don’t smirk on that song. I’m not doing it with any sense of irony or condescension.”

It’s true “Hot Rod Lincoln” remains Cody’s best-known song. Kirchen made it his by adding new dimensions, including a raft of mini-tributes involving guitar riffs associated with stars like Johnny Cash, Duane Eddy, Jimi Hendrix, Marty Robbins, Johnny Rivers, and Roy Orbison. “I was adding the iconic intro to ‘Folsom Prison Blues,’ trying to crack up the band, I did ‘Semi trucks passed me by, then Johnny Cash passed me by,’ and played that lick. Then it was really off to the races.”

On the album, he played a pine Tele copy built for him by Rick Kelly, of Carmine Street Guitars in New York’s West Village. “He makes them out of 150-year-old pine,” Kirchen explained. “Mine was actually made from (indie film director) Jim Jarmusch’s loft. No truss road in the neck and it’s an extremely fat neck. Pickups are by Don Mare.”

The next album may be a departure. “I’m sort of leanin’ toward wantin’ to do a honky tonk record. I never did a pure honky tonk record – with Bobby (Black). That’s just one thing I’d love to do. I’d like to dig a little deeper into Swamp Pop, the Gulf Coast… There’s a million things to do. I just want to keep goin’.”

While carving his own musical niche, Kirchen maintains the spirit the Lost Planet Airmen created almost 45 years ago. “I still have a career in the music business and I’m thankful for that, he concludes. “And I’m still playing ‘Hot Rod Lincoln,’ and those songs are still requested. So I feel in that sense, the legacy’s been good to me.”