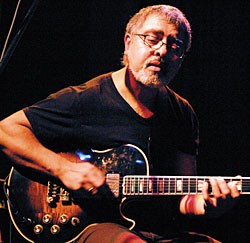 Fareed Haque is a jazz-fusion and classical player who’s known for stunning guitarmanship, yet for one reason or another, his name often flies under the radar.

Nevertheless, his chops have landed him top gigs with Sting, legendary keyboardist Joe Zawinul, and jazz singer Cassandra Wilson, as well as performances with symphony orchestras in the US and abroad. Since 2001, he has also been making inroads into the jam-band scene with his funky outfit, Garaj Majal. To top it off, the busy Mr. Haque is an associate professor at the Northern Illinois University’s school of music. His latest effort, Flat Planet, is a world-fusion set that mixes jazz, fusion and ethnic flavors with guitar improv that is typically fascinating and complex.

You once said that Miles Davis’ trumpet sound reminded you of some ancient tribal horn and, in fact, your guitar tone is pretty raw itself.
I don’t really go for that typical heavy-fusion tone. I like the notes and playing of guys like Scott Henderson, John Scofield, and Allan Holdsworth, but I just hate that type of guitar tone. I generally prefer the cleaner sounds of Jim Hall, Grant Green, and Pat Martino. Basically, I’m an acoustic classical guitarist, so when I plug in, I like an electric guitar to have a similar dynamic range, articulation range and brilliance. On the other hand, Pat Metheny and a whole host of younger jazz guitarists all tend to go for the “no tone whatsoever” approach – this sounds dead to me. I want to hear the attack of the guitar and the tone of the instrument. I tell young players to think about guitar history and how it relates to your tone. Players like Django, Wes, Charlie Christian, Hendrix, Segovia and Paco de Lucia all had one thing in common: a bright, fat sound with lots of dynamics. And that’s the kind of tone I like – raw, but also honest.

You’re a big fan of Pat Martino and his acclaimed 1976 album, Joyous Lake. How did that record inspire you?
Pat was the only guitarist to play modern jazz guitar from the bebop tradition… most modern jazz guitarists abandoned the traditional tone and tradition of jazz guitar, in an attempt to sound more like a saxophone, or to fuse rock and jazz using rock tones and techniques. Pat, meanwhile, came out of Grant Green and Philly, so his bebop had funk built right in. As a result, his songs had odd time signatures and grooving melodies. To me, his guitar playing was a perfect evolution of jazz guitar. Pat doesn’t play that way anymore – his style is much more harmonically conservative and less rhythmic, though he still plays unbelievably well. Pat and I have also hung out a bit and he remains my idol in many ways.

Flat Planet has lots of Indian percussion and instruments. Do you have a personal connection to that sound?
Since I’m half Pakistani, my family grew up listening to Hindustani film music, quawalli (Sufi devotional music), and all kinds of music from Pakistan and India. So, unlike many jazz musicians who get into Indian music from a mathematical or theoretical point of view, I fell in love with the groove and melody of this music from a young age. Also, I love John McLaughlin and Shakti, especially their 1977 album, Natural Elements. This is great music. Hopefully, the Indian influences on my record will remind us that India is a place of fun and dance and good people. 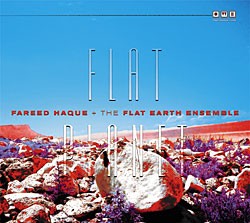 How about your custom-made sitar/guitar doubleneck?
This instrument allows me to play sitar in a six-string format – the wide bridge gives it that sitar “buzz.” There’s also a set of sympathetic harp strings. It was built and designed by the great builder and yogi master Kim Schwartz. I love this instrument, and Kim recently redesigned and overhauled it, so now it’s back on the road.

What is your main amp and pedal setup?
I’ve tried all that digital-processor stuff, but I like cheap pedals better. To me, the tone has more grit and balls. On the road I use a Boss ME50 that sounds great, but I have a few old pedals that I always go back to, like the Crybaby wah, DOD envelope filter, Electro-Harmonix stuff, and now the Pigtronix pedals. Of course, Moog pedals are also the bomb. As for amps, about 90 percent of the time I use a backline rental amp at wherever I’m playing.

Do you collect guitars?
I have some amazing guitars, like a newer Guild Artist Award that has great sustain and tone. It just got repaired by Saul Koll after Southwest Air snapped the headstock in half – fortunately, the airline has been great about paying for it. I have a ’71 David Rubio classical that is being restored by a wonderful luthier name Ron Pinkham in Maine. It can be heard on Flat Planet on the duet with violinist Kala Ramnath – just gorgeous tone. I also have a mid-’70s Ibanez 6/12 string doubleneck – its pickups blow away similar Gibson ones from the same era. Lastly is my joy, a 1981 Ignacio y Hijos Fleta classical with spruce top and Indian rosewood back and sides.

Tell us about your Gibson L5-S?
I’ve owned many of them, most to get that Joyous Lake sound – sweet, jazzy, but still able to play it with a loud band. There were three main models: one with low-impedance pickups and a trapeze tailpiece. It was heavy, but great sounding. Then there are my favs, which had humbuckers and trapeze tail. The last version had a stop tailpiece – most folks like this the best, as its more like a Les Paul, but its more electric sounding to me. What set the L5-S models apart were their all-maple construction, not just a maple top. That tone is fat, bright and honest. Actually, I’ve stopped playing mine so much – I figure I can’t be a Pat Martino wannabe all my life (laughs)! So I’m now stuck with my own style… for better or for worse!


This article originally appeared in VG‘s June 2009 issue. All copyrights are by the author and Vintage Guitar magazine. Unauthorized replication or use is strictly prohibited.
Fareed Haque – Venezuelan Waltz #3