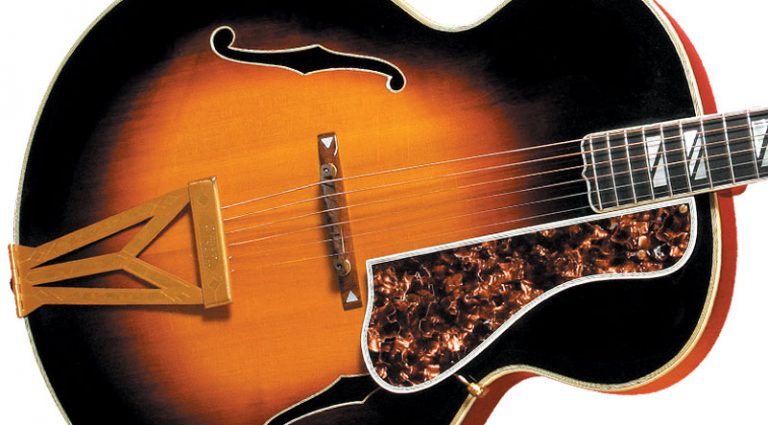 Much of America was still recovering from the Depression in 1934 when Gibson introduced a guitar at a price that was almost $100 higher than its current top-of-the-line model, the L-5. At $400 (with case and zippered case cover, compared to $302 for the L-5 with case), the Super 400 seemed a more appropriate model for the opulent 1920s, when Gibson sold fancy banjos for that much and more, than for the shell-shocked economic atmosphere in the first half of the 1930s.

It was a risky move for Gibson, which had only recently been producing wooden toys to survive the hard times, but it was a move Gibson had to make to protect its reputation and its future. The risk paid off as the Super 400 became not only the standard archtop for players, but the industry leader for a new era of super-sized “jazz” or “orchestral” guitars.

Gibson created the Super 400 to quash an attack by Epiphone on Gibson’s status as not only the inventor of the archtop guitar – the company had been founded in 1902 on Orville Gibson’s concept of carved-top guitars and mandolins – but also as the only maker of carved-top f-hole guitars. Until 1931, that is, when Epiphone launched its nine-model Masterbilt archtop line. Suddenly there were more Epiphone archtop models than Gibsons, and to add insult to injury, Epi’s top models were 3/8” wider than Gibson’s L-5.

Gibson had more than one battlefront at the time, as Martin had introduced its large-bodied dreadnought-sized flat-tops in 1931, and Rickenbacker (nee Ro-Pat-In) would release the first viable electric guitar in ’32. It was ’34 before Gibson mounted a counterattack against Epiphone, but when it came, Gibson unveiled a secret weapon called the Super 400.

Gibson did not just move up to the next logical dimension with a 17″ guitar; the L-5 was “advanced” to that spot, and all the other archtops moved up an inch in size, too. The company went on to the next step, to 18″. They had a ready-made body design in the form of 18″ oval-hole guitars that Orville Gibson had made at the turn of the century, before the Gibson company was founded.

In ornamentation, too, Gibson took giant steps. The pearl block fingerboard inlays that had identified the L-5 archtop since 1929 were appropriated for the Super 400 and given diagonal slashes. A five-piece diamond-shaped headstock inlay also incorporated an angled slash, and the diamond was repeated on the back of the peghead in a three-piece inlay.

Initially, guitarists had a choice of a thin top or thick top. The difference of about 1/16” was expected to make a noticeable difference in tone, but it proved a negligible tonal difference, and the tops soon became all the same.

If the $400 price tag seemed high, Gibson literature gave a simple explanation: “Its price is a criterion of its quality.”

Musicians agreed, as they found the Super 400 to have the power and tone to cut through the sound of the big bands of the 1930s. Muzzy Marcellino with the Ted Fio Rito orchestra was one of the first to set his L-5 aside for a Super 400, just in time for the group’s two #1 hits of 1934, “My Little Grass Shack…” and “I’ll String Along with You.” Gibson catalogs showed a young guitarist at Chicago radio station WJJD who had also put down his L-5 for a Super 400; he was billed as Rhubarb Red but he would soon be known to the nation as Les Paul.

One measure of the Super 400’s influence was evident in the reaction of other makers. Epiphone responded with the Emperor, which, true to form, was 3/8” wider than the Super 400. In New York, John D’Angelico had been making 161/2” guitars along the lines of Gibson’s L-5, but by 1936 he was offering 17″ and 18″ models. In Boston, Elmer Stromberg began making 17″ and 19″ models, and named his top model the Master 400.

The Super 400 went through several changes, including a slightly wider upper-bout dimension in ’37, an improved tailpiece in ’39, parallel top bracing (the originals had been X-braced) in ’39, and most important, the addition of a cutaway version in ’39 called the Super 400 Premier (later shorted simply to Super 400C).

As the electric guitar and rock and roll began to dominate popular music, the Super 400 maintained its position as Gibson’s top model with an electric cutaway version, introduced in 1951. Scotty Moore began using a natural-finish Super 400CES (for Cutaway Electric Spanish) with Elvis Presley in ’56. When Elvis made his 1968 “comeback” TV special, Moore was once again on hand with a Super 400, this time a black-finished 1963 model (with pointed cutaway) that Elvis borrowed from Moore to perform “One Night With You.”

Beginning in 1948, Gibson offered a spinoff with plain ornamentation called the Super 300, along with a Super 300C (cutaway) in ’54. The Super 300 actually sold as well as the Super 400, but carried no prestige and were gone after ’57.

The non-cutaway acoustic was discontinued in 1955 and the cutaway acoustic in ’82, but the CES version has never gone out of production. Gibson has also taken advantage of the Super 400’s familiar slashed-block and split-diamond motifs to enhance several models, starting in ’61 with the Johnny Smith (later LeGrande) and including the Super V CES model (essentially an L-5 body with a Super 400 neck) from 1978 to ’93. In addition, the slashed-block inlays appeared in the solidbody line on the 25th Anniversary Les Paul in ’79 and on the Les Paul Custom/400 in 1991-’92.

Gibson’s Custom, Art & Historic division reissued both cutaway and non-cutaway acoustic versions of the Super 400 in ’93 and featured a natural-finish Super 400 alongside the new R9 Les Paul on the cover of the first Historic Collection catalog. The acoustics were last offered in ’97, but the electric cutaway Super 400 CES not only remains in production in the Historic Collection, it still holds its traditional position as the highest-priced of Gibson’s “core production” models.