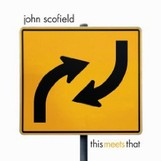 It’s never good to expect anything from John Scofield because he likes to throw a curve. With his latest release, he mixes great originals with surprising covers on a trio record… sort of. Steve Swallow handles the bass, Bill Stewart drums, and their rapport with Scofield is immediately evident. But there’s also a horn section that contributes greatly, but never intrusively.

“The Low Road” opens the set and showcases many great aspects, starting with a cacophony of harmonics that turns into a quiet jazz roadrace with Scofield soloing over the horns. The song has a jazz head that immediately sticks, and Scofield’s solo showcases his chops and sense of soul. “Strangeness In the Night” is slightly off-kilter, rhythmically and harmonically, going from ballad to swing tune for more than seven minutes while Scofield’s soloing plays tour guide. “Heck of a Job” has that wonderful New Orleans funk feel his music sometimes adopts. Is is a dig at the how the Katrina situation was handled?

But the real surprise here is the choice of covers, like a lovely version of the Charlie Rich classic, “Behind Closed Doors,” with an exquisite statement of the melody before Scofield’s solo mixes double-stops, single lines, and chords in a churning mix of country and jazz. Bill Frisell joins for a version of “House of the Rising Sun” done up in a stomping swing. Wrapping things up are three minutes of great, funky rock in the form of the Stones’ “Satisfaction,” with a melody mostly stated with chordal work and a solo that’s as soulful as it gets.