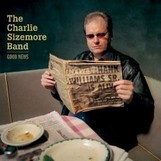 Charlie Sizemore’s career began at age 17, when he was hired by Ralph Stanley to replace legendary lead singer Keith Whitley. After leaving Stanley’s band, Sizemore went back to school and graduated from the University of Kentucky with a law degree. He has since run a successful law practice in Nashville, while continuing to play bluegrass.

Good News, features Sizemore’s regular band, Danny Barnes (mandolin), Matt DeSpain (dobro), John Pennell (bass), and Wayne Fields (banjo). On the very first song, “I’ve Fallen and I Can’t Get Up,” the band dispels any questions regarding its musicianship as they tear through the song at supersonic speed, finishing in 2:42 – and yes, everyone takes a solo!

Not only can Sizemore write great songs, he also sings beautifully. His voice has a wonderfully warm, comfortable timbre that demands a listen. His take on bluegrass is closer to Doyle Lawson or the Nashville Bluegrass band, with an emphasis on tight harmonies and well-orchestrated arrangements instead of breakneck pace and instrumental pyrotechnics.


This article originally appeared in VG‘s December ’07 issue. All copyrights are by the author and Vintage Guitar magazine. Unauthorized replication or use is strictly prohibited.

The Byrds – Live at the Fillmore February 1969, (untitled)