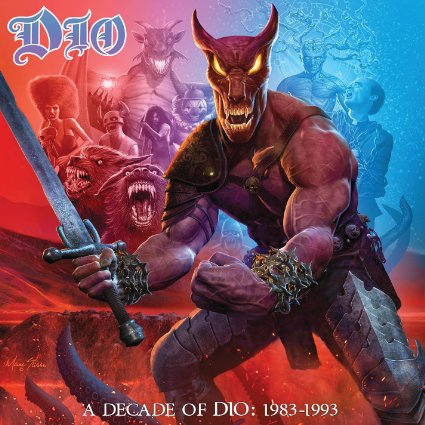 There’s his music, his style, and his metal-culture influence. But above all, Ronnie James Dio is responsible for creating one indelible symbol – the flashing of the goat horns. Rhino has now released this box set of Dio’s first six albums covering 1983 to ’93. And in honor of this event, fans everywhere must join together to stop anyone utilizing Dio’s iconic hand sign during non-Dio happenings.

This re-mastered box set in either CD or vinyl form has new artwork by Marc Sasso. The collection includes Dio’s most enduring work: Holy Diver, The Last In Line, Sacred Heart, Dream Evil, Lock Up The Wolves, and Strange Highways.

The vinyl version comes with a bonus 7″ single. Side one is 1983’s “Evil Eyes,” which was originally the B side of “Holy Diver.” This is a different version from the one that was originally on Last In Line. The other side features “Time To Burn,” the sole studio track on the live album Intermission.

This is classic material from metal’s greatest vocalist. Dio was visionary in choosing gifted guitarists as evidenced in this collection – Vivian Campbell, Craig Goldy, Rowan Robertson and Tracy G have never sounded better.

Dio is gone but he will never be forgotten.