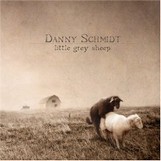 Cover art matters. Take the image on Little Grey Sheep, displaying an artfully moody image of a black sheep and a white sheep “doing it.” If that doesn’t make you stop and think, nothing will. Schmidt’s music has similarly graphic yet poetic quality that puts things together in ways that lead in unexpected directions.

The CD is made up of songs that didn’t fit into any of Schmidt’s previous four albums – they were too personal. But time changed his view, and songs such as “Go Ugly Early” resonate on multiple levels. The melody is reminiscent of Steve Earle’s “Ben McCulloch,” while Schmidt’s vocal inflections have a Neil Young-like lilt. The event is a simple visit to Hooters, but the story of father-son bonding ranks with the best. “Adious to Tejasito” celebrates Austin, Texas, while gently dissing the state’s other cities. Schmidt calls it his anti “Screw You, I’m from Texas!” song, which seem obligatory for Texas singer/songwriters.

Little Grey Sheep production embraces a do-it-yourself creative ethic. Recorded in three weeks in the home studio of Devon Sproule and Paul Curreri, the album has a minimalist, unadorned sonic quality that moves the songs to the forefront. Schmidt’s vocals aren’t mixed to the front like on most commercial releases; instead they sit back, on the same plane as his acoustic guitar. The overall sound has a certain distance and natural reverberance that gives the listener the feeling the band is playing from the far corner of a sparsely furnished room.


This article originally appeared in VG‘s April ’08 issue. All copyrights are by the author and Vintage Guitar magazine. Unauthorized replication or use is strictly prohibited.