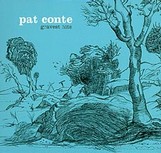 Long Island’s Pat Conte is a rarity among record and instrument collectors in that he can really play. Actually, that’s an understatement.

One of the foremost experts on “world music,” Conte compiled and annotated Yazoo Records’ Secret Museum Of Mankind volumes – all manner of music, from all over the world, remastered from 78s recorded from the 1920s to the ’40s. If your “academic” alarm just went off, hit the snooze button. Conte is not folk music’s equivalent of the comic-book dealer from “The Simpsons”; he’s more the “world music” counterpart to folk music archivist Harry Smith.

Ricocheting from style to style, he gets a wide array of sounds just on guitar, requinto, and banjo. An 1885 skin-head cello banjo, with wire strings and a rag wrapped near the bridge, sounds uncannily like an oud. Similarly, a short-scale Silvertone acoustic strung with super-light sitar and bouzouki strings, tuned as tightly as possible, resembles a tiple on “First Rain In Spring.”

African guitarist John Bhengu is the inspiration behind several songs, though Conte is quick to point out that his fingerpicking is only a caricature of the master’s complex technique.

The 52-year-old sings in a voice that’s sometimes thick and gruff, then clear and beautiful, as on “Three Wise Men.”

Like his albums as one half of the Otis Brothers (with Bob Guida), the recording is low-fi – sometimes sounding like a field recording of Dock Boggs, other times resembling Geoff Muldaur – but not enough to detract or distract from the music’s impact.


This article originally appeared in VG‘s October ’07 issue. All copyrights are by the author and Vintage Guitar magazine. Unauthorized replication or use is strictly prohibited.