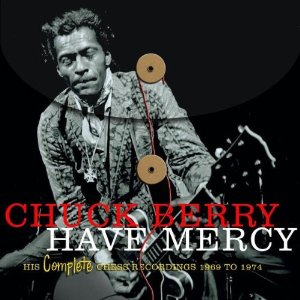 1964 was a good year for Chuck Berry. He hit number 10 on the pop charts with “No Particular Place To Go,” number 14 with “You Never Can Tell” and did pretty well with “Nadine” (23) and “Promised Land” (41). All were on the Chess label and all have proved as enduring as the iconic tunes that made his rep in the ’50s.

But when Berry moved to Mercury records in ’66, his hit-making mojo stayed behind. It wasn’t until he returned to Chess in 1969 (Back Home came in 1970) that he started to see the top of the heap again. In fact, he hit the top for the first time when a live “My Ding-a-Ling” became his first and only number one pop single. Another live one, “Reelin’ And Rockin’” would also chart. But the silly “My Ding-a-Ling” isn’t representative of Berry’s career or his second stint at Chess. This set should redeem him in the eyes of those who wrote him off after he disappeared from the radio and the charts and slipshod live performances had become his hallmark.

Have Mercy proves Berry still took himself seriously as a musician and recording artist, no matter how cynical, disillusioned, or angry he had become as a person and live performer. Several instrumentals – like “Gun” and “Flyin’ Home” – show his reputation as a brilliant, innovative guitarist was neither unjustified nor inflated. When he approaches the blues of Willie Dixon’s “I Just Want To Make Love to You” he’ll also surprise those who think he favored slickness over funkiness; “Here Today” shows the distinctions between R&B, rock and roll, blues, and country music are tenuous and, more important, irrelevant; even when recycling riffs and themes – as on “Rockin’” and “London Berry Blues” – he’s still first-rate and listenable. And he’s fresh and inventive on live takes of his classic numbers or while reinterpreting songs associated with other artists, like “Hi Heel Sneakers” (which he calls “Heel Sneakers”) or “Shake Rattle and Roll.”

Despite having suffered through some likely undeserved time in prison and seeing his musical legacy claim-jumped by upstarts, during the period covered by Have Mercy, Chuck Berry was still one of rock and roll’s most valid and vital artists.

Dick Dale – King of the Surf