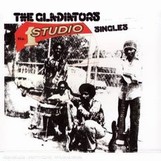 In the years before Bob Marley became the star of reggae and eclipsed most others, a galaxy of lesser luminaries shone bright. The Gladiators were one such band, and a luminescent one at that.

Formed by the trio of Albert Griffiths, Clinton Fearon, and Gallimore Sutherland, the Gladiators were also one of the few reggae vocal groups who played their instruments. Most “bands” in that day used studio musicians to provide music behind their vocals.

The Gladiators were also one of the premiere early roots reggae groups to make it on the international scene. With production by the famed Clement Dodd at the equally famed Studio One, they boasted a steady shot of hits from the late 1960s until their zenith in the late 1970s.

Studio One Singles collects Gladiators singles, dubs, and overlooked rarities – something available in countless supply from reggae labels like Studio One. Tunes here like “Boy in Long Pants” display the groove the Gladiators could drive. Good stuff.


This article originally appeared in VG‘s March ’08 issue. All copyrights are by the author and Vintage Guitar magazine. Unauthorized replication or use is strictly prohibited.