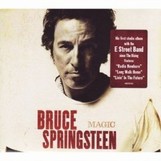 Advance word on this album centered on its anti-war lyrics, but its true focus is on the return of the E Street Band and Springsteen’s classic signature sound.

“In the Future” does discuss events in America the past few years, set to a rollicking Jersey sound that calls to mind “Tenth Avenue Freeze Out.” “Magic” is a folk tale that superficially discusses sleight-of-hand, but more deeply lets the listener know that Bruce is referring to the Bush administration, not Houdini. “Gypsy Biker” is an E-Street stomper about a friend returning from war – in a casket.

So, yes, the war is on Springsteen’s mind. But his thoughts and emotions here are not in-your-face. Some might cry “cop-out,” it’s really just a case of a songwriter who truly knows his craft. And those songs are just the tip of the iceberg. “Girls in Their Summer Clothes” is a piece of Spector-like rock, “I’ll Work For Your Love” is full of Catholic imagery – perfect E-Street music with a hook big enough to drive a truck through.


This article originally appeared in VG‘s Feb ’08 issue. All copyrights are by the author and Vintage Guitar magazine. Unauthorized replication or use is strictly prohibited.