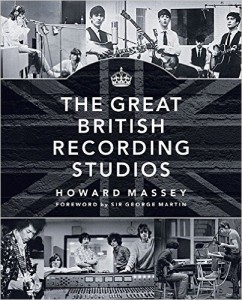 Recording studios comprise the secret history of rock and roll, those clandestine lairs where many of the greatest albums of our lifetimes were recorded. If you’re an avid liner-notes reader, you already know most of the greatest British studios by heart: Abbey Road (EMI), Olympic, Pye, Air, Advision, Trident, the Manor, Ramport, Decca, and more. In this deeply researched book, studio veteran Howard Massey (Behind the Glass) details these rooms and control booths, compiling a vast account of musicians, producers, engineers, studio gear, floor plans, and anecdotes of the greatest sessions of the 1960s and ’70s.

Although this isn’t a guitar book per se, guitarists will find plenty to drool over. In the chapter on IBC studio at Portland Place, we read about the 1964 session by the Kinks that yielded “You Really Got Me,” the British Invasion single that put overdriven guitar on the map.

Massey writes, “One critical component… was lead guitarist Dave Davies’ signature distortion, achieved by playing his Harmony Meteor guitar through an Elpico amp slaved to a Vox AC30, with the speaker cone of the Elpico…having been sliced by a razor and punctured with knitting needles.” After just two takes with producer Shel Talmy and engineer Glyn Johns, the Kinks made rock and roll history.

You’ll dig the photos of the Rolling Stones at Olympic cutting Beggars Banquet, as well read about Eric Clapton’s Blind Faith, who cut their one and only album there. Led Zeppelin also tracked many of their first five LPs at Olympic.

You’ll also learn about De Lane Lea studio in Soho where the Animals cut “House Of The Rising Sun” and the Jimi Hendrix Experience tracked “Purple Haze” and “Hey Joe.” The Beatles stopped by for a few sessions in ’67 to record George Harrison’s “It’s All Too Much.”

One of the greatest guitar solos of all time, Jimmy Page’s magnum opus on “Stairway To Heaven,” was cut at Island studios, located at 8-10 Basing Road in West London. Engineer Andy Johns gives a long anecdote of the session, noting, “it was a long afternoon [of recording solos.] It was one of those paranoia things. [Jimmy said] ‘How was that one, Andy?’ ‘It’s really good.’ ‘No, it’s horrible, let me do another one.’ We both decided, let’s stop being paranoid and – voilà! In another 20 minutes, he’d done it.”

This is one of a many insightful backstories from author Massey in this 350-page book, which is full of behind-the-scenes photos. Sure, there’s plenty of geeky info about legendary Neumann mics, Neve mixers, and the scourge of studio “hum,” but also lots for us guitar nuts to enjoy. Without doubt, this is destined to be one of the best rock books of 2016. – Pete Prown