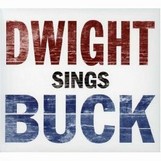 When Yoakam put the twang back into country music in the mid ’80s, his mere existence was a tribute to his chief influence, Buck Owens. And in 1988 he brought the then-retired Owens back to live performing – and, with their duet on “Streets Of Bakersfield,” the top of the charts.

That Yoakam would record an entire album of Buck material after the country icon’s death in 2006 was a given; the only question was when.

What made the remake of “Streets,” an obscurity from Owens’s catalog, work so well was that it contrasted two distinct vocal stylists and wasn’t afraid to add touches like Flaco Jimenez’s accordion and producer Pete Anderson’s octave guitar. On this self-produced effort, Yoakam is alternately experimental and overly reverent. Compare “Foolin’ Around,” which has Dwight’s sound and phrasing stamped all over it, to “My Heart Skips A Beat,” where he sacrifices his own identity to ape Buck’s trademark slurred delivery.

On “Act Naturally,” Yoakam should have taken a cue from Ringo Starr – who made no attempt to imitate Buck on the Beatles’ hit version. It’s like Yoakam came to the studio some days and sent a Buck impersonator other days. For “Down On The Corner Of Love,” Dwight is back in the vocal booth, and even lets guitarist Eddie Perez break out an electric sitar, while pedal steeler Josh Grange thoroughly shines.

In keeping with Buck’s tradition, Dwight uses his road band – Perez, Grange, bassist Kevin Smith, and drummer Mitch Marine – in the studio, along with keyboardist Skip Edwards. Like Buckaroo Don Rich, Perez provides the stinging Telecaster as well as high harmony vocals, and does a great job at both.

Dwight Yoakam is the last artist one would suspect of being self-conscious, and he’s at his best when he just rears back and belts out rockin’ renditions of “Above And Beyond” and “Love’s Gonna Live Here Again” – simultaneously true to Buck’s spirit and his own personality.

He pushes the envelope further on the slowed-down, percussion-laden “Close Up The Honky Tonks,” one of the CD’s most interesting tracks. Likewise, Buck’s trademark freight train rhythm is replaced with a quasi twist beat on “Under Your Spell Again.” “I Don’t Care” features some Beatles-ish guitar flourishes, and Yoakam actually alters Owens’ classic melody on a gospel-tinged “Together Again.” Is it as good as Buck’s original? Of course not. But this is, after all, Dwight’s album.