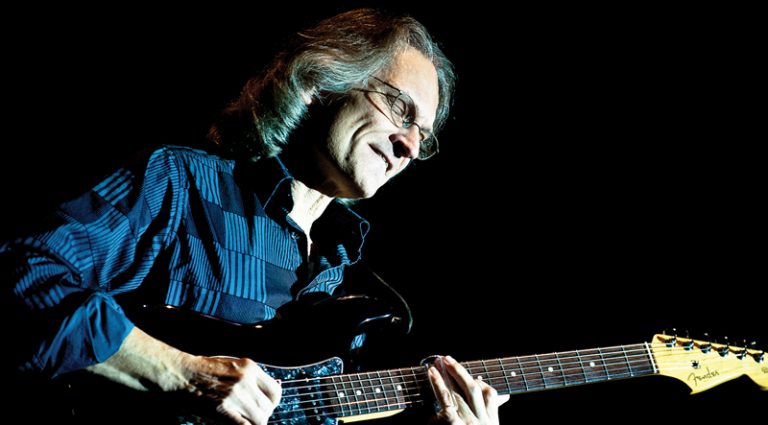 When music fans discuss upper-echelon slide mastery, the name Sonny Landreth tops most lists. The preeminent slide-guitar stylist of his generation, his touch not only harkens to the masters, but yields fresh and innovative techniques. His new album, Recorded Live In Lafayette, is two discs that join the rich influences heard on Bound By The Blues, with copious helpings of Creole flavor. Aided by the talented Sam Broussard on acoustic guitar, Live In Lafayette simmers with skill and fervor.

Were there any epiphanies between Bound By The Blues and Live in Layfette?

I wanted to do an acoustic album, so I started thinking, “Should I do a trio thing? Should I add a couple of guests and a couple of my best friends? Should we do this live?” So I ended up going for all of them at the same time (laughs), which is not the wisest idea. Then again, some really great stuff happened. As always, it’s good to know that when you surround yourself with great musicians and leave room for spontaneity, the magic does happen.

If there was an epiphany, it may have been more along the lines of what kind of electric guitar player I really am, tackling an acoustic (laughs). It was the first time in years I’d played an acoustic, and it was a bit humbling.

How did you choose songs?

It was a bit challenging. I think the main thing for me has always been that some songs have a life of their own and stay with you. That’s what I learned from the repertoire on Bound By The Blues. Some of the songs had been with me so long and they’d come and go. They’d get away from me for a good while but come back again. So, I lean toward that and my own compositions. I wanted them to be representative of songs that came from different albums and different times. Songs like “Creole Angel,” which we hadn’t done in a long time, had always been an electric piece. That would be a great opportunity to show another side of that song, which is what I love about playing acoustic.

You really strip it down to the soul of the song. I really don’t think you could really do otherwise. We literally had no rehearsals for all of that, and that was somewhat intentional. We wanted to tap into that spontaneity. You’re leaning on the tribe in such a way that’s so special. You can’t do that with just anyone.

Which acoustic guitars did you use?

I stuck with going for the reso-sound, and thought about going for the vintage sound and Nationals. I mostly used the guitar that Larry Pogreba made for me some years back – one of his hubcap resonators. They’re awesome. It’s aluminum-bodied, and he uses vintage hubcaps from a ’56 Oldsmobile. He cuts the top off, so that’s the cover plate. The way he designed the hubcap feels great. It has a midrange punch and an airy sound that’s brighter. The harmonics really pop.

Do you still play Strats?

Oh, yeah, and my Strats have undergone so much work over the years with the prototypes from Fender. Comfort is a big deal with me; the more comfortable I am, the better I’m going to be playing. That doesn’t mean there’s something to be said for getting out of your comfort zone, and getting something new and different.

What kind of effects pedals do you use with your guitars?

My reso goes into a Radial Engineering Elevator pedal. It works well to boost the signal and has a Mid control that works really well with that Teisco pickup. On my electric board, my guitar goes into a Fulltone Plimsoul drive pedal and from there, an Analog Man compressor. I have two pedal boards – a smaller board for the reso that’s bypassed for the electric guitar. For the electric, I use the Demeter Fuzzulator as a boost. The main pedal is a Nosferatu, and from there it goes into that same compressor, then a Voodoo Labs Giggity mastering preamp. It really fattens up the signal. That goes into a chorus and the Visual Sound Dual Tap Delay.

I’m going to get out and support the album. That’s still the ever-changing landscape in the business. When people are out and they get to see an experience, they make a connection with the actual album – where it came from and what it was all about. It’s the first live album I’ve done in a long time. As I go, I hope by sometime next year I’ll have perfected the acoustic a lot more.