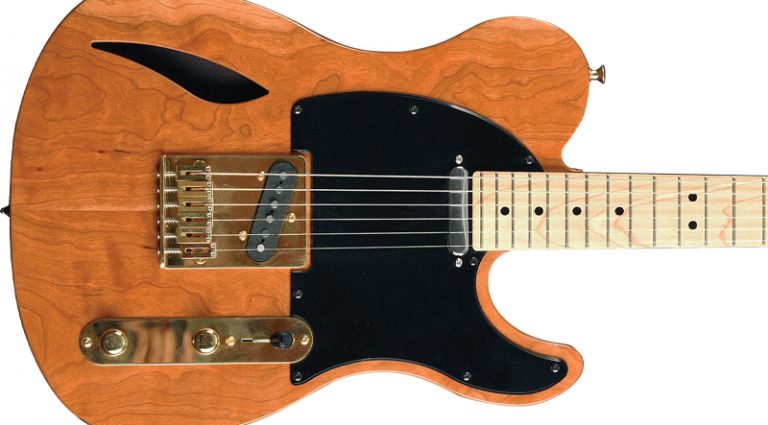 When guitars made by Jon Kammerer Customs first appeared, players and industry folks recognized that its sculpted tonewood paraboloids were… well, different.

So, what’s the result when a progressive builder rethinks a classic like that first product of Leo’s design genius? He likes it so much that he names it Dorado after that mythic place of fabulous wealth.

Kammerer offers the Dorado in Standard and Deluxe versions, with optional chambered body, cherry finish over mahogany, and a two-piece/bookmatched maple neck in one of a dozen optional profiles. The neck is finished with buffed gun oil, the body with expertly applied clear nitrocellulose lacquer. Gotoh gold hardware complements the warm color of the Deluxe’s figured-cherry top.

A closer look at the Dorado body shows it’s not just another Tele knockoff. Refinements like the lines of its bass-side upper bout, treble horn, and the widened curves of the waist elevate the Dorado to a heightened aesthetic. A wing-shaped soundhole perforates the top’s bass side, and the contoured back and recessed four-screw neck plate lighten things up and provide a comfortable feel. The headstock is a three-on-a-side design with curves and sculpted surfaces.

The neck has a two-way truss rod that is adjustable from the midpoint of the headstock, and a compound-radius maple fingerboard with “blind” fret slots (which do not cut through the edges).

Stock electronics include reverse-polarity Golden Age Vintage Spec Tele pickups with Alnico V pole pieces and a three-way switch. CTS pots with a .47-microfarad tone capacitor and a .0022 cap on the Volume pot for consistent frequency response at varying levels sit inside a shielded control cavity. The snap-in jack offers assurance one’s playing won’t be interrupted by a sudden, noisy disengagement of the cable.

Fed into a reissue Fender Vibrolux with Tone knobs at 12 o’clock, output from the Dorado’s neck pickup balanced well with the bridge pickup. Though there was an audible loss in volume from the selector’s middle position, the sound was tailor-made for chicken-scratchin’ funk rhythm, and switching to either pickup by itself produced an immediate gain boost right in the zone for soloing.

When A/B’d with an older single-cut body with a ’68 Fender neck and Seymour Duncan pickups, followed by a thinline-style parts guitar with Rio Grande pickups, the Kammerer voiced a clarity that stood out despite the chambered body. For the pedal aficionado or band guitarist finding his slot in a mix that includes B-3, a horn section, and an ES-335 player, that glassy transparency will be welcome.

Another side of the Dorado appears when the Tone control is manipulated in the manner of Tele players such as Roy Buchanan, who negotiated the knob to produce wah and other effects. With no discernible volume drop, the Golden Age neck pickup assumed an unexpected character more akin to that of a set-neck solidbody; a Les Paul player who’s forced to switch axes will appreciate its sound – and the tuner layout.

Like most custom builders, Jon Kammerer offers several options. His brand is highlighted by unique, fresh designs, and the Dorado Deluxe, though familiar-looking to most, reflects that approach like a city of gold.