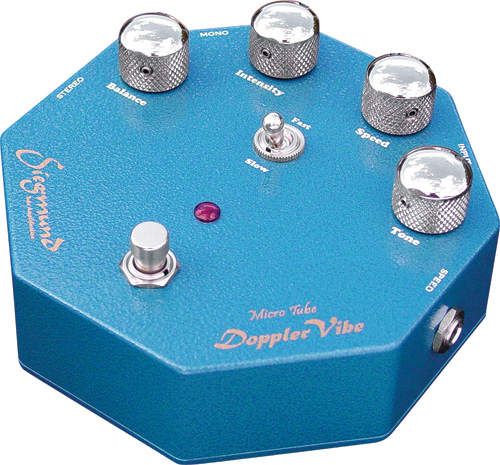 It’s been said that Buddy Guy was the first guitarist to put his instrument through a Leslie rotating speaker. Supposedly, this was done in a pinch after his amp crapped out during a 1965 session for Junior Wells’ seminal Hoodoo Man Blues, but the result was a fresh new sound.
Soon after, the Beatles started experimenting with rotating speakers, followed by Jimi Hendrix and Cream. As more guitarists picked up on the Leslie, they were faced with the problem of moving these behemoths that were often the size of a small refrigerator.

As the ’60s progressed, the Uni-Vibe became what many believe to be the first pedal to simulate a Leslie. Since then, dozens of pedals have been devised to produce shimmering, liquid tones. The latest entry into the war of the vibes comes from Chris Siegmund, founder of Siegmund Guitars and Amplifiers. His hand-built, tube-driven Doppler Vibe, contained in a heavy-duty, blue octagonal case, provides a range of great Leslie-esque tones, from lush chorus to fast tremolo.

The Doppler Vibe, which comes with its own power supply, is relatively simple to operate, having only five controls. The Intensity knob controls the level of effect, from subtle to pulsating. Speed regulates the rate of pulse, made visible by a blinking red LED in the center of the pedal. Additional range of speed up and down can be invoked through a Fast/Slow toggle (an optional foot controller – a wah-wah-style rocker pedal – does this manually by overriding the speed controls).

The Doppler Vibe’s Balance and Tone controls are a little more involved and have a unique relationship. Balance combines both sides of the phase when in mono mode, while the Tone knob splits it into unique, out-of-phase signals. In stereo mode the two allow the player to emphasize different sides of phase through the two amps, creating an effect that can best be described as ranging from a rotating speaker effect to a pitch-shifting vibrato.

When tested through a ’66 blackface Vibrolux Reverb, it becomes apparent in mono mode that the micro tubes within the Doppler Vibe provided a significant signal boost, warming up the front end of the amp – a nice touch, especially when using a bright guitar, in this case a 1970 maple-neck Strat. It didn’t, however, color the sound of the guitar. The optional foot controller allows the player to ramp up from slow to fast just like a real Leslie, a great feature as that speed variation becomes an effect onto itself. With the foot controller rocked all the way back, the Doppler Vibe provided a nice, slow chorusy sound, à la Hendrix’s “Angel.” With a push forward of the pedal, the speed escalated to a “Burning of the Midnight Lamp” fast tremolo.

The real fun began when a ’69 smallbox Marshall 50 and 2×12 cab were plugged into the Doppler Vibe’s stereo input. Placing the amps about 20 feet apart transformed the room into a giant rotating speaker cabinet. This was truly a transcendent experience, with waves of sound coming through the two amps at slightly different times, phases, and pitches. A Tube Screamer placed in front of the Doppler Vibe increased the intensity until the pulsating was almost visible.

When put through the tube-buffered effects loop of a Colby dtb50 (VG, Feb. 2013), the Doppler Vibe seemed to become one with the amp. Although the pedal increased the hotness of the signal, it didn’t bring a noticeable level of additional noise when using the effects loop.

By placing waves of bass and treble around the room when in stereo mode, the Doppler Vibe closely mimics a rotating speaker, though this effect pedal goes way beyond simple Leslie clone. It is a very usable effect that should inspire many who want to add a little “spin” to their sound – and avoid a little pain in their backs!