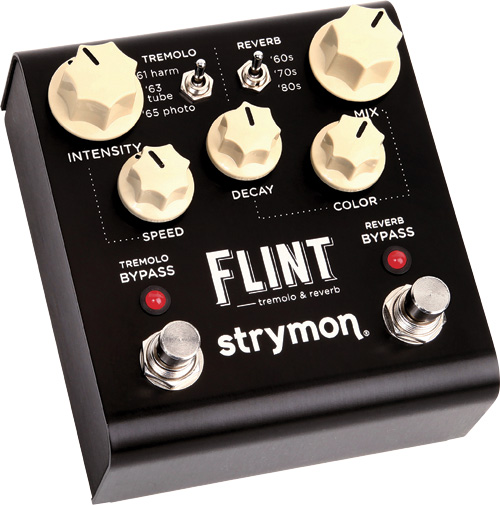 In just a few short years, Strymon has established itself as a premier developer of pedal effects. With boxes like the highly praised El Capistan dTape Echo, they’ve cut out a niche building DSP effects that recapture the sounds of iconic analog gear with remarkable authenticity.

A recent addition to Strymon’s lineup is the Flint, a two-in-one pedal that re-creates tremolo and reverb circuits from historic guitar amps and studio effects. With the Flint, the dynamic duo of trem and ’verb as heard in much-coveted, seldom-acquired gear can be dropped right into your signal chain.

As famously well as tremolo and reverb work in tandem, they are discrete effects in the Flint, each with its own bypass switch, LED indicator, and parameter controls on the face of a handsome black box. On the trem side, a mini switch selects between three tremolo types: ’61 harmonic band filtering (think early brownface Fenders like the Concert and Twin), ’63 power-tube bias (brownface Princeton), and ’65 photocell (Deluxe Reverb). The Speed knob controls how fast or slow the trem oscillates, and Intensity controls the depth of the effect, ranging from no effect at hard left to smooth waves around 12 o’clock to the stuttering chop of a square wave at hard right.

On the reverb side, a mini switch selects between ’60s spring tank, ’70s electronic plate (inspired by the EMT 250), and ’80s studio rack hall (Lexicon, Alesis). The Mix knob controls the wet/dry balance, Decay lengthens or shortens the reverb trail, and Color varies the reverb tone – great for tailoring the Flint to your existing rig.

Strymon engineers note that they don’t model any specific amps or effects, but pore over the schematics of old circuits to learn how to re-create their unique and most desirable characteristics. While one musician will appreciate, say, how well Flint’s ’70s reverb plate emulates the coveted EMT 250 (to learn more, clench your wallet tightly and then check eBay), another will simply enjoy the ease with which gentle waves of vintage trem, an ambient wash, or a genuine surf tone can be recalled. In fact, Flint not only captures those vintage colors faithfully but expands on original parameters. The reverbs can create nearly infinite decays, for example, and trem speeds can run slower than the original amps allowed. Any analog purists out there are still free to set their Flint dials for vintage limitations, if they prefer.

Tremolo and reverb are wisely paired, and interact under the Flint’s hood in compelling and highly usable ways. Each can bolster the other’s best qualities or rescue an effect that needs tweaking. A reverb set to short decay and dark color adds girth to a hard-edged trem; a photocell trem softens and warms a hollow reverb. The Flint makes it possible to dial in completely convincing tones from days long gone but also allows the player to selectively dial out the undesirable sonic characteristics of those original circuits – a ticking trem, a splashy reverb attack – and replace them without sacrificing a tone’s organic, natural quality.

Secondary functions of all the front-panel knobs, accessed by holding down the two bypass switches, make possible more variations and customizations, such as a 3dB boost or cut when an effect is engaged. The order of the effects in the signal chain can be swapped; though the default setting is Reverb>Tremolo, in keeping with traditional circuit routing, reversing the order produces the more real-world sound of an amp with tremolo in a reverberating hall – the guitar signal reverberates without the peculiar sound of a reverb trail being tremmed. Another conscientiously added feature gives the player the capability to rig Flint for analog bypass rather than true bypass, so that active reverb sounds sustain when the effect is bypassed rather than abruptly cutting off.

On the back panel, the input is configured for mono but internal jumpers can be reset for TRS stereo input. There are left and right stereo outputs, plus a jack for one of three external connections: an expression pedal for continuous control over any selectable parameter; a Strymon “Favorite” switch for recalling one favorite preset in addition to the current dial settings; or a switch for tapping in tremolo tempos.

For anyone on that Holy Grail quest for vintage tone, the influence of tremolo and reverb shouldn’t be underestimated. If you have been inching closer to it, the Flint may be the big step you need. But for players with any kind of rig, playing any style, the Flint delivers high-quality trem and reverb as if plucked from the chassis of a classic piece of gear.