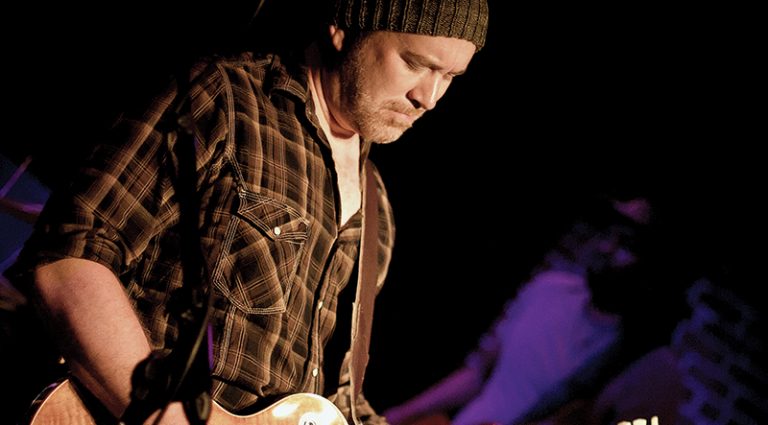 Brian Kahanek is a guitar-slinging southerner whose style sits firmly within blues and southern rock. With a perfectionist’s ear for detail, his albums communicate soulful melodies over rich American soundscapes. He has also found success as a recording engineer, giving him a skill set that leaves other guitarists envious. Kahanek’s latest, Rise To Shine, displays massive guitar tones, top-tier guitar prowess, and pristine production.

Being a recording engineer gives you the kind of skills most guitarists could really use.
When I was recording in college, I would listen back and think, “This is not even close to what I was hearing in my head!” (laughs) I love it all, but it all started with guitar. It takes a long time to get over the ego of guitar. I’m standing on the shoulders of giants from the engineering world. Those guys are great musicians in their own right.

How did this come about?
I was on the road playing guitar with a band called Gypsy Soul. I would come off the road and be broke, so I joined a temp service because I was good at Excel and building databases. I got sent to Disney a lot. One of the people I worked with there knew a guy who did character voices and was the head engineer. I made a call to him, we hit it off, and they hired me.

I always had a home studio and recorded all the time to improve my production, so that was my first professional gig. Then I started getting sessions for movies and TV work. I was always on both sides of the glass. I’d be doing a guitar session one day, and be behind the board the next.

How has your knowledge of sound engineering affected your playing in the studio?
It’s more about how many layers I want to put on a tune. If I want B3 on the track, or want to use special effects, I’ll need to lighten up on the guitar tracks. If I’m going to use one guitar track on a song that’s an a cappella performance, I’ll make it more interesting.

If I use more than one guitar track, like a Duane and Dickie kind of thing, I’ll arrange the parts to support one another. What I like the best is writing guitar parts so they’re like alter egos within the song. My new record illustrates that pretty well.

Recording puts your technique under a microscope. Your playing on Rise To Shine is immaculate.
I’m trying to get that magic take, because you can tell if there’s a lot of editing. All that splicing is disingenuous, but it’ll come down to two or three takes, then I’ll choose the best one. Sometimes, the tone that I’m getting will put me in a different direction. Maybe I’ll play a little sweeter and not as fast, because the tone is dictating the song.

What are some common mistakes guitarists make in the studio?
One big lesson for me was bringing racks of gear. I had a 20-space rack full of power amps, preamps, and switchers. I went into the studio and spent six hour trying to get a guitar sound. The engineer said, “Why don’t you turn off all that rack s**t and plug into a Marshall? If it works for Angus Young, it’ll work for you.” I used that Marshall with a Tube Screamer and recorded the entire record with that setup. The next day, I sold my rack.

A lot of guys think their live rig is going to translate. My advice is to trim down the amount of pedals and go straight into the amp as much as you can. That’s where the dimension comes from. As much as possible, I try to get pure signal to tape.

What’s your number one guitar?
I have a 2015 Les Paul ’58 reissue that I really love. It’s the Dickey Betts tone on steroids. And, the Fender American Vintage Series is killer.

What’s next?
I’m constantly in the studio because that’s my bread and butter. I want to play out live, so I’ll be flying to Europe for some dates. I had a track on my first record that appeared on Guitar Hero 2 almost 10 years ago. It’s given me a great following of people who love my stuff. Rise To Shine is a high watermark for my playing and production, and I want to give it as much of a shot as possible for people to hear.

I do a lot of sound design for Disney and Warner Brothers. I’ll be writing music for TV, running my company, Sidewinder Post, and making guitar records. I can never stop because it’s in my blood.