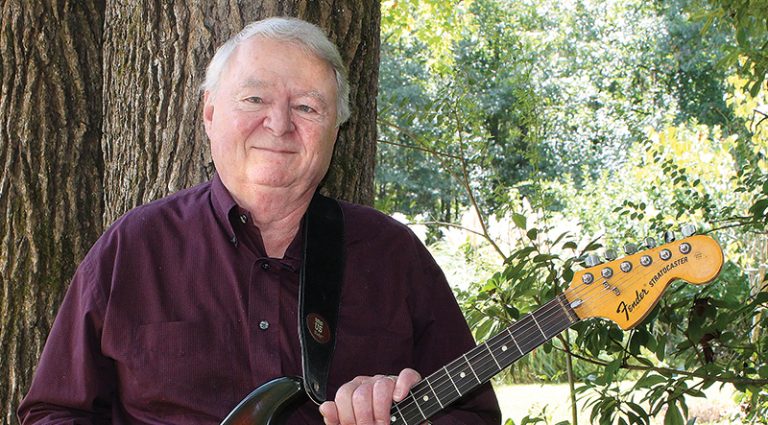 When he joined Atlanta Rhythm Section in early 1972, J.R. Cobb and Barry Bailey had more in common than simply being the band’s co-guitarists.

Like Bailey (VG, December ’16), Cobb had been playing in bands since the early ’60s. Furthermore, he had performed in a hit-making aggregation. Born in Birmingham, Alabama, he grew up in Jacksonville, Florida.

“No one in my family was particularly musical, but the radio was on all the time when I was a child, and I was exposed to lots of different kinds of music,” he said. “My uncle gave me an old beater acoustic and taught me a few chords, but I really didn’t get interested in playing until high school.”

Cobb’s first electric was a Silvertone guitar and amp, and he later upgraded to a Fender Jazzmaster and a borrowed Fender amp.

“I was influenced by the Ventures, Duane Eddy, Chet Atkins, Buddy Holly, and just about anybody I heard on the radio,” the guitarist recalled. “I was in a band that played sock hops, supermarket openings, cocktail lounges, and night clubs, which in Jacksonville at the time were just fancy names for bars with a little stage and a dance floor.”

He recalled interpolating British music after the Beatles appeared on “The Ed Sullivan Show.”

“We dropped most of the instrumentals and started to discover R&B and traditional blues,” he said.

“Nobody played much country music, and standards weren’t cool anymore.”

Cobb was a member of the original lineup of the Classics IV, which formed in Jacksonville in 1965. The band’s producer/manager was Buddy Buie (1941-2015), who ultimately co-wrote numerous hits with Cobb, including “Traces,” “Spooky,” and “Stormy.” They also co-wrote Sandy Posey’s “I Take It Back” and Cobb collaborated with Ray Robert Whitley on “Be Young, Be Foolish,”Be Happy” (“A beach-music anthem!” he recalled proudly).

“The idea of writing songs just really appealed to me,” Cobb said of his rapid evolution. “I’m sure the Beatles and artists like Roy Orbison, the Beach Boys, and other singer/songwriters coming along then sort of fueled that. While most of the Classics IV hits were mellow or ballad-ish tunes, that isn’t necessarily my preferred style.”

As for gear with the Classics IV, Cobb recalled, “I played a Jazzmaster for a short time then switched to a Telecaster, which I played as long as I was in the group. I had a Fender Super Reverb, and I have kicked myself ever since for getting rid of it.”

By the early ’70s, Buie and Cobb were ensconced in the operation of Studio One, a recording facility in Doraville, Georgia.

“ARS was made up of studio musicians and a couple of other players that hung out and recorded at Studio One,” he said. “I used a couple of Strats and a couple of black Les Paul Customs; some were tuned for slide. For acoustic, I used an Ovation. I used an Ampeg amp for a while and later switched to Peaveys when we got an endorsement deal. In the studio, I always preferred Fender, but unfortunately, they just weren’t loud enough for the stage.”

The list of ARS hits is long – “So Into You,” “Champagne Jam,” “Alien,” “Angel,” and more. The band defined a laid-back stylistic facet of southern rock, and created numerous hit albums. Memorable performances included a gig at the White House during Jimmy Carter’s presidency, two Champagne Jam mega-concerts in Atlanta, and the Knebworth festival in England.

Cobb could hold his own among the high-caliber musicians in the ARS – one example is the live version of “Another Man’s Woman,” which clocks in at over 14 minutes on the band’s live 1979 album Are You Ready? In addition to a jaw-dropping bass solo by Paul Goddard, the song includes stinging trade-off licks from Cobb and Bailey.

Cobb ultimately tired of road life and departed the band for an easier lifestyle.

“I was pretty burned out,” he reflected. “I had a teenage son who my wife was raising virtually by herself, and I wanted to do some other things, as well. I worked with (producer) Chips Moman and played behind (country supergroup) the Highwaymen for five years.”

These days, he’s still going at his own pace in rural Georgia, and enjoys playing at his leisure.

“For the most part, the time I spent in ARS are some of my best memories, and I don’t regret one day,” he said.