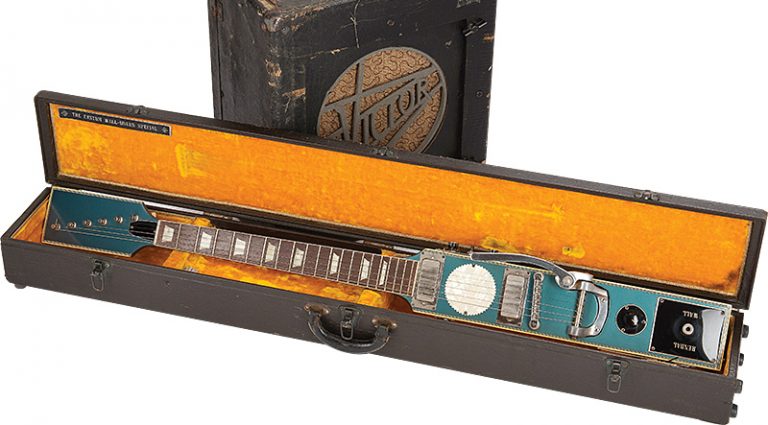 In the world of “guitarcheology,” it’s well-documented that the truly interesting stuff – prototypes, one-offs, custom instruments – usually surface close to the source. For instance, in the 1970s, Fender prototypes walked into guitar shops in Orange County, California. D’Angelicos are typically still within a few hours of New York City, as they were almost all custom-built for local players. And, if you’re looking for rare and historically significant Gibson pieces, they tend to float out of the Michigan woods near Kalamazoo, where they were made.

Over the years, local collectors have seen amazing Gibson instruments turn up in western Michigan; stories of Les Paul sunbursts and Super 400s and J-200s that once belonged to Gibson employees or professional musicians “supplied” with the company’s finest. In addition to production models and vintage collectibles pieces, the area has yielded numerous prototypes, oddities, and custom instruments made by employees in – or out of – the factory.

Such is the case with the Wall-Board, a guitar that emerged at a guitar show a half-decade ago, causing a stir among those who thought they’d seen everything. Yet another Gibson oddity, it’s one of the wildest instruments to leave the factory during the company’s golden era.

While the Wall-Board may look like Gibson’s answer to the LaBaye 2×4, its 1964 date stamp puts it ahead by several years. It has a neck-through-center chunk of wood from a first-generation Firebird and its uncut headstock retains that model’s six-in-line/banjo-tuner configuration. Other unusual features include a retractable strap, Vari-Tone circuit, pushbutton pickup selector, and a custom-made case that looks like it could contain a hunting rifle.

Unlike so many stories involving one-off or oddball guitars, there’s virtually no challenge in determining the source, since the builder put his name all over the instrument (and its case) via inscribed plaques; Rendal “Ren” Wall was a Gibson employee well-known in the area and the son of Rem, who for 30 years led the Green Valley Jamboree band on Kalamazoo TV station WKZO and, circa 1939, went to work making violin bows at Gibson. As a noted musician, Rem was often asked by management for input on design innovations like the humbucking pickup as it was being developed by Seth Lover.

Ren Wall began working for Gibson in 1960 and remained onboard until the Kalamazoo plant closed in ’82. A few years later, he became one of the founding employees of the Heritage Guitar Company, which took over the ground floor of the original Gibson factory. Still with Heritage, he has spent more than 50 years in the same building! Wall is also known for being the man who played an original Gibson Moderne – the mythical great white whale of vintage guitars. After borrowing it from Gibson’s “morgue” storage facility in the early ’60s, he played the guitar in a local theater production of Bye Bye Birdie, then returned it to the morgue.

Today, the Wall-Board belongs to an employee of Michigan-based ThroBack Electronics, which makes strings, effects, and pickups using machines like those originally used at Gibson, including a bobbin winder that sat unused at Heritage. The story illustrates the family element of the guitar-making community in western Michigan, and we recently spoke with Wall to learn more about the Wall-Board.

How’d you get the idea to build the Wall-Board?
Well, when you’re young, you have different ideas! When I first started with Gibson, I was in the mood to do something different because I was there. Everybody was throwing out ideas, so I thought I’d try one. I first made what was called the Eighth-Note Guitar. Ever heard of that?

There were photos; it’s another Gibson oddball – oversized and shaped like a musical note. You were responsible for that?
I remember buying the big chunk of wood from Julius Bellson, who was Gibson’s treasurer at the time. I paid quite a bit of money for that big block of mahogany. I had this idea for interchangeable fingerboards with different scale lengths – you just popped ’em in. Also, you could change the pitch of the neck from where the fingerboard joined the body on the back. The other arm held the tension of the strings, the fingerboard was free-pitching – you just strung it up and you could change the action from the back of the heel.

So, after the Eighth-Note guitar, you started on the Wall-Board…
It was just a body [a Firebird neck-through center section] – I didn’t have any horns.

How long did it take?
I imagine it was a year, year and a half, maybe two years after I started fiddling around with the idea; I put a stamp on the back when I completed it. It was painted Pelham Blue and I left the peghead square, and if I remember right, it had a couple [Firebird mini-humbucking] pickups. I swiped the circuitry from the bass we had back then, with the pushbutton tone control… then I put a strap inside, so it would roll up and hide, put a Bigsby on it, and cut out a little plastic pickguard. I can’t remember who made the case.

What gave you the idea for the retractable strap?
I think I was trying to put as much as I could on that small body. I said, “Hey, there’s some room for something like a Boy Scout belt.” I just figured I’d roll it up inside, and it had little teeth that would hook to the strap button.

It seems like a real rock-and-roll guitar, but you’ve always been a Country-Western player…
Yes, I played country with my dad. I’ve played professional steel guitar, drums, bass, guitar, and sang. People who used to watch our TV show for 37 years and our two radio shows for 40 years, most of them are now in nursing homes, so I’ve performed in some of them. I’m continuing, still entertaining.

How much did you play the Wall-Board?
I don’t remember ever playing it out. I think it was something I wanted to say that I built – a guitar that was wild and out there. The Eighth-Note guitar was the same way.

What do you remember about playing the Moderne?
I played it in a Bye, Bye Birdie presentation at the Barn Theater. I could have bought that thing for 50 bucks! But it was so ugly nobody wanted it. I put it back up in the “morgue” and later, when Norlin bought Gibson, they cleaned out all that stuff, and I don’t know who got it. I didn’t have anything to do with it after Bye Bye Birdie. It wasn’t my style – I was more into the country stuff, and steel guitar and bass.

You’ve had a long, successful career in guitar building with both Gibson and Heritage.
I started at Gibson on September 9, 1960. After a while, I became foreman of 14 cleaners, 24 fret filers, two inspectors, and I was the last guy in the booth before they were shipped out. That’s what I did for quite a few years, and then I started developing things. I had a lot of ideas back in the days with Gibson; I developed the TP-6 tailpiece, the sliding pickup for the Grabber bass, the top-adjust Tune-O-Matic, the Sustain Sisters for the 347 – B.B. King had those on his Lucille, which I delivered to him. I invented several things before they finally put me in engineering, and off we went.

I left Gibson in ’82 and started working at Heritage in ’85, where I developed the double VIP electronics and some other things. I never got rich on any of this stuff, but had a lot of fun because I just loved guitar so much; I still do, and I’m still working at Heritage. I’m 74 and have close to a million guitars under my belt. We counted one day! I don’t think anybody else can say that.

The Wall-Board may be a footnote in Gibson history, but it’s a unique instrument with a great story. It’s fun to speculate about how many oddball Gibson-related instruments could surface from the woods of Michigan. Could someone show up one day with the Moderne? Stranger things have happened.

Special thanks to Mark Huizenga and Jerry Douthett.

This article originally appeared in VGJune 2016 issue. All copyrights are by the author and Vintage Guitar magazine. Unauthorized replication or use is strictly prohibited.