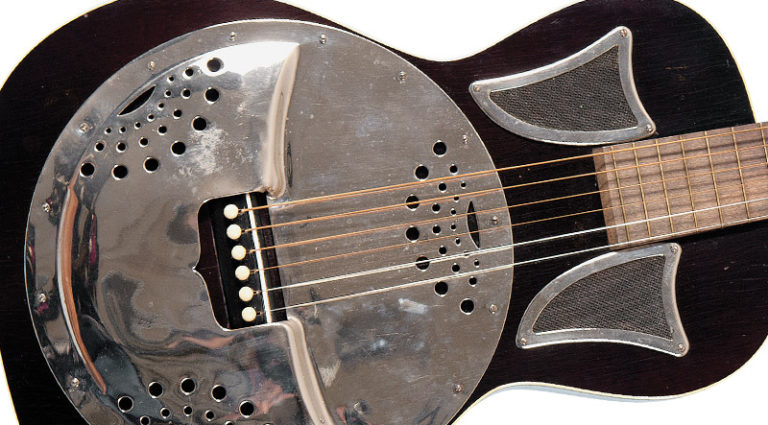 It’s hard to imagine a more poorly “documented” guitar brand than Slinglerland. The company has been around since before World War I and made a lot of guitars and banjos until the start of World War II, including the circa-1933 May Bell Amplifying Guitar.

Slingerland was primarily a down-market supplier, so precious little documentation exists. One frequently reprinted brochure, often labeled “1920s,” is more likely from 1936/’37 and features some of the company’s better instruments. Another source is Bob Cook’s The Slingerland Book, but it’s highly anecdotal and almost entirely about drums. One oft-repeated mistake is that Slingerland was a drum company that got into stringed instruments. In truth, it was entirely the other way around!

Henry Headen Slingerland was born in Manistee, Michigan, in 1875. As an adult, he liked to wager, and probably operated a gambling ship on Lake Michigan, until it burned down. He won a lot of things in card games, but the frequently repeated story that Slingerland began when H.H. won a ukulele manufacturer in a poker game just isn’t true.

Though he was not a trained musician, at some point, Slingerland apparently worked for a family-run music studio where, by 1909, he learned enough to open the West Side Conservatory of Music, in Chicago. The school offered lessons in strings, winds, singing, and elocution. We know little else, but it is almost certain that the instruments were provided free when you signed up for lessons. They would have been inexpensive, beginner-grade, and not yet made by Slingerland.

Slingerland also had some unclear relationship with the Chicago Correspondence School of Music, supposedly established in the late 19th century. This company offered a free instrument to customers who committed to mail-order lessons. Cook says the instruments were sourced from Germany. The owner passed away and Slingerland purchased the school in 1914, changing the name to the Slingerland Correspondence School of Music, still advertised in 1923, offering a “$20 value” violin, guitar, mandolin, ukulele, five-string banjo, tenor banjo, banjo uke, banjo mandolin, and cornet with the lessons basically priced to cover the instrument.

Factory photos show guitarmaking jigs and other evidence suggest Slingerland did make some of its own stringed instruments. It’s almost certain that Slingerland built its own better banjos. However, as we’ve seen, Slingerland sourced instruments from other manufacturers right from the start, especially its cheaper models, and this continued throughout its history. A number of the illustrations on that 1923 ad look to be made by Harmony. By the time of the late-’30s catalog, some guitars were built by Regal and at least the cheapest banjo was a Kay. While it’s not certain, the bodies on Slingerland’s better May Bell Violin Craft archtops may have been sourced from other manufacturers, possibly Harmony. The necks were made by Slingerland, as were the contemporary Songster electric Hawaiian and Spanish guitars.

Regal guitars are slightly better-documented than Slingerlands. The brand was born in Indianapolis as part of the Wulschner Music Company, founded by Emil and Flora Wulschner circa 1895. In 1904, the trade names, unsold inventory, and supplies were sold to Chicago’s Lyon & Healy (L&H), which began producing Regals in 1908. After 1911, Regal operated independently of L&H and in 1930 ended up with L&H’s factory, producing its own and other brands. Beginning in ’32, these included some Dobro resonator guitars for National/Dobro. Thereafter came a variety of “resonator” guitars “inspired” by the National/Dobro patents!

Among the models made for Slingerland by Regal was the circa 1933 May Bell Amplifying Guitar seen here, which has a mahogany-finished birch body typical of inexpensive guitars of that era. Its glued-in neck appears to be birch, the fingerboard is rosewood-stained hardwood, the two wire screens on the upper shoulders do indeed cover two sound holes, and instead of an aluminum resonator cone, it has a round spruce plate or soundboard. You get a circle of spruce instead of a whole top!

As a fingerstyle Spanish guitar, it plays well enough, but sounds like most birch-bodied guitars from the ’30s – thin. Played with a slide, it yields a complex sound that’s easy to warm up to. The separate spruce soundboard gives it a little more volume than a regular flat-top, with a bit more funk to the tone.

Slingerlands never used serial numbers, so there’s no data on quantities or dates, but we know these faux resonator guitars were gone by ’35. This was one of the lower grades, below a mahogany version and the fancy Cathedranola.

Circa 1926, H.H. Slingerland got into a conflict with William Ludwig (of Ludwig & Ludwig drums) over an Army contract bid, and in ’27 began making drums. Slingerland guitars didn’t survive World War II and H.H. Slingerland died in ’46, but by then the company had acquired Gene Krupa’s endorsement and was solidly a drum manufacturer. Since 1994, Slingerland has been part of the Gibson empire. This guitar’s associations make it an important link in the strands of American guitardom.

Special thanks to Mike Newton.

This article originally appeared in VG’s November 2012 issue. All copyrights are by the author and Vintage Guitar magazine. Unauthorized replication or use is strictly prohibited.