If you hung around the audio world’s collective R&D room long enough in the late 1950s and early ’60s, you’d have thought that, very soon, everything would be happening in stereo.

And why not? Who wants drab, flat mono when life could be happening in multi-dimensional stereo? And soon, it most often was… other than in the guitar-amp world; a reality that was not for want of effort on the part of a handful of manufacturers, Gibson most prominent among them.

Stereo is a Greek word meaning, simply, “solid” – not “dual,” nor “left-and-right,” nor any bi-channel relationship. So, in combination with “phonic,” it gives us “solid sound,” a definition that puts a slightly different perspective on amp tone.

Before the better-known, wedge-shaped stereophonic GA-79RVT, Gibson got its feet wet in stereo with the GA-83S Stereo-Vib, designed in 1959 and produced in a total of just 279 units before its demise in ’61, according to Gibson’s shipping records. Likely, the convoluted approach to the stereo thing as achieved in the GA-83S proved impractical in the face of simpler (arguably more obvious) means of achieving stereophonic guitar amplification, but that’s part of what makes this combo such an interesting – and cool-sounding – subject.

Rather like the great Magnatone stereo amps, the GA-83S used a lot of tubes: three 12AX7s in an upper preamp chassis and another in the lower chassis (housing the power amp and vibrato circuit), two 12AU7s, three 6CG7s, four 6BQ5s (a.k.a. EL84s), and a GZ34 rectifier. Yep, 14 in all. The entire thing was configured in genuine stereo; that is, into two independent amps. You could plug in one of Gibson’s nifty stereo guitars, such as the ES-345 or ES-355, and route each pickup to a separate side, or plug in a boring old mono guitar and spice it up via a linked stereo routing with ping-pong vibrato to let you know you were really trippin’. 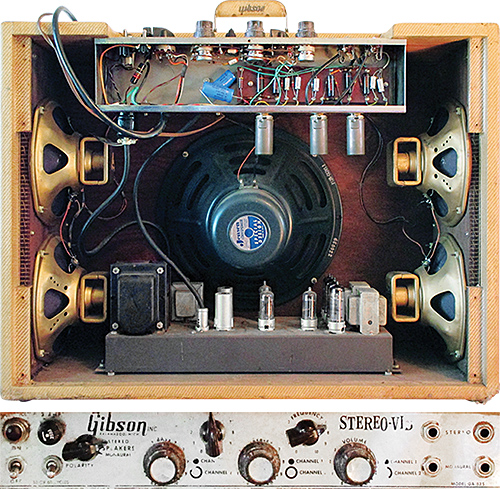 To make all of this happen in a certified left-to-right fashion, the GA-83S employs five speakers and two output transformers, each of which is fed approximately 18 watts from its own pair of EL84s, which in turn have their own 6CG7 phase inverter, which receives signal from an independent preamp path generated by the front-end circuit in the upper chassis. The final path of each side is ultimately routed either to its own pair of 8″ alnico speakers mounted in baffles on either side of the cab, or (in some mono modes) summed to a single 12″ Jensen P12R firing forward in the traditional manner (a speaker rated far shy of the amp’s full 36-watt mono output), while in others, all five speakers are in play. Between the two mono inputs and two stereo inputs and the Stereo/Monaural switch, the full range of output options includes:

1) Speaker selector on mono, guitar in either of the two mono inputs: 12″ only.

2) Speaker selector on stereo, guitar in either of the two mono inputs: all four 8″ working, no 12″ output.

3) Speaker selector on mono, guitar in either stereo input: all speakers firing, all four 8″ plus the 12″.

The latter two options, running together, would clearly have been Gibson’s intended mode for use with its stereo guitars of the day.

For all this, the GA-83S’s preamp and output chassis’ circuits aren’t overly complex, and the control panel is admirably simple. Though it does its own thing, the preamp stage looks more like Fender’s brownface/blackface topology (yet to come) than anything considered “tweed,” with independent Treble and Bass controls sandwiched between a first gain stage and a gain make-up stage for each channel, both provided by 12AX7s. The two halves of a 12AU7 in the output chassis provided another slight gain stage for each side of the stereo path, and a vibrato circuit based around a 12AX7 applied bias modulation to the cathodes of each of a pair of 6CG7 tubes coming next in line, before each channel hit its half of another 6CG7 used as a simple split-phase inverter. Functions are kept extremely tidy on the upper-rear-mounted control panel thanks to Gibson’s use of concentric pots for each channel’s Volume, Treble and Bass controls, plus standard controls for the stereo vibrato’s Depth and Speed.

We’re calling it “vibrato” since that’s what its designers named it, though the GA-83S’s effect falls just shy of true pitch-varying vibrato, and is really more of a slightly phasey, pseudo-vibrato tremolo effect, not unlike that found in Fender’s larger brownface amps. This is a great sounding tremolo in and of itself, but the stereo ping-pong that bounces the pulse back and forth from side to side really kicks it over the top.

“I have played through a few amps and this is my all-time favorite – a variety of sounds are available from just a few controls, and it just sounds really great in any setting,” says VG reader Paul LaFiosca, the owner of this particularly clean example, which really only suffers from its loss of the Gibson logo from the front grille. “The amp provides great twang and cut with a Tele, and with a Strat it is very ‘glassy,’ very classic Strat-sounding. All these tones are easily altered just by turning the knob from mono to stereo. It goes from the 12″ Jensen in mono setting to the four 8″ Jensens and it gets notably louder. This is while being plugged into one of the two mono inputs. The sound breaks up quicker with the 8″ speakers than the with the 12″ and you get a very musical and usable crunchy tone. If you add the Gibson vib with the footswitch, the tone gets bigger and sweeter, with more space.”

To get this GA-83S Stereo-Vib into prime playing condition, LaFiosca enlisted Orlando-based engineer Brian Hendrix, who formerly worked on the supercollider. Not that such elevated skills were necessarily required; some new filter caps, a few resistors, new tubes, and a properly grounded three-prong power cord were all it took. But, “I think it’s kind of cool that my amp was repaired by a nuclear scientist!” says LaFiosca.

If the wonders of stereophonic guitar amplification ultimately proved too elaborate or cumbersome to become the standard – as it did in the worlds of home hi-fi, car audio, cinema, and so much more – it certainly provided an enchanting detour for many adventurous engineers and players.