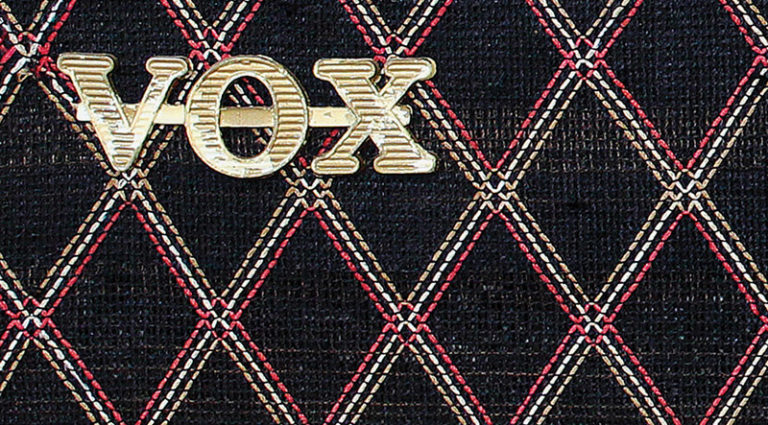 The history of Vox amplifiers’ evolution through the early/mid-’60s directly tracks with The Beatles’ increasing needs to be heard over the screams of fanatical audiences. Simultaneously, the arrival of the AC100 foretells a trend that would make the 100-Watter a must-have on large stages the world over.

Even as the Vox AC30 was proving to be Jennings Musical Instruments’ (JMI) flagship amp in early 1963 – and initially seemed as powerful as anyone could desire – the music world was on the verge of demanding more from its backline. Destined to define the “stack” within a couple of years, Marshall was really just getting into the business, and Vox was still a much bigger player by comparison. Having already secured many big names on the British scene, Vox famously landed The Beatles in January 1963, in a deal cut between Fab Four manager Brian Epstein and JMI sales manager Reg Clark. The terms? Simply that The Beatles would (temporarily) trade their worn-out fawn Vox amps for new black AC30s, which they’d play exclusively onstage as “thanks.” Arguably one of the most manufacturer-favorable endorsement deals in the history of such negotiations, the Beatles would use nothing but Vox on stage for several years. But, almost from the onset, the AC30s were no longer able to cut it, and something bigger was badly needed.

Without going into the intricacies of which new Voxes the Beatles received or when and where they played them (there are two great books on that topic – Vox Amplifiers: The JMI Years, by Jim Elyea, and Beatles Gear by Andy Babiuk), it was initially thought guitarists George Harrison and John Lennon would both need 50-Watters, but ultimately determined that only 100 watts would cut it for bassist Paul McCartney. Accordingly, prototypes of what would become the AC50 and AC100 were developed by JMI engineer Dick Denney and the team, and, by late ’63, they were in the hands of the Beatles just in time for their December ’63 Christmas concerts in Finsbury Park, London.

As would seem sensible for a manufacturer that already had a market-leading amp, Denney cobbled the AC100 using a variation on the AC30 Top Boost circuit, with a few changes thrown in to suit the goals of the more-powerful head/cab setup. Accordingly, the amps were built with a single channel and controls for Volume, Treble, and Bass, the latter EQ governing a cathode-follower tone stage that used a full ECC83 (a.k.a. 12AX7) in front of its potentiometers. This was the same tone stack becoming available as an option on the panels of AC30s from late ’63, or as a back-to-factory modification to previous renditions, where it was done as an added panel (on the back of the amp) that carried the necessary preamp tube, circuitry, and controls.

One notable difference between the 80-/100-Watters and the 30-Watter was the use of solid-state rectification in the AC100, which helped supply the stout, efficient current demanded by a powerful, high-headroom amplifier. Another was the use of ECC82 (a.k.a. 12AU7) preamp tubes in the first gain stage and the phase inverter, where an ECC83 would be found in the AC30. The ECC82/12AU7 is a much lower-gain tube more commonly seen in hi-fi preamps and was clearly part of Denney’s effort to deliver plenty of clean, relatively high-fidelity power from the AC100 with as little preamp distortion as possible along the way. For comparison’s sake, gain factors of common preamp tubes are ECC83/12AX7 at 100, the ECC81/12AT7 at 60, the 6072/12AY7 at 40, and the ECC82/12AU7 at 20, making the latter the coolest in terms of drive. As a result, guitarists plugging into a vintage AC100 and expecting it to sound like a massive rendition of the AC30’s juicy, saturated tone when set to the edge of breakup (or a little beyond) are often somewhat disappointed by the resolutely clean, punchy, in-your-face sound that ensues. They can be great-sounding amps, make no mistake, but they’re not AC30 times three. Or at least, the majority of the run was not… 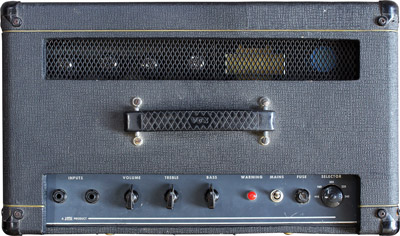 The first production renditions of early/mid-1964 were cathode-biased, which limited their output to around 80 watts from four EL34s rather than the 100 watts they would eventually generate in fixed-bias. Cathode biasing was part of the topology that contributed to the AC30’s beloved sound, but it’s rare in amps of the AC100’s power, where the main goal is volume and clarity, hence its early deletion from the platform.

The example featured here is a 1966 AC100 Mark 2, as the iteration is generally known, with the wide-edged cabinet, grey control panel, and black-diamond cloth that replaced the thin-edged cabinet, copper-red panel (later also grey), and red-brown cloth of earlier renditions. Otherwise, as with AC100s made from ’64 to mid ’65, this impressively clean, original example squeezed a lot of iron and glass into a stout, squat cabinet. Provided for inspection by our friends at Bay State Vintage Guitars, the amp delivered a bracing experience with a ’63 Strat, moving serious air and ominously rattling the shop windows in the process.

As for its predecessor supplied to the Beatles, following the London Christmas shows, McCartney’s AC100 prototype went with the band for a run of performances at the Olympia theater, in Paris, from January 16 to February 4, 1964, during which the 50- and 100-watt Voxes teamed with the power drain from the lighting and broadcast equipment to overwhelm the venue’s archaic wiring and electrical supply, leading to several blackouts.

Following that, the AC100 and AC50s were hoisted into a Pan Am jet headed to New York for the moptops’ first foray into the United States. Though these would be the first amplifiers American crowds would see the Beatles play in person or on television (though they were hidden behind curtains offstage during their legendary live TV appearance on “The Ed Sullivan Show” on February 9, as was the show’s practice), they would never prove to be the most popular Vox amps with guitarists stateside.

While The Beatles were certainly the best-known users of AC100s, other bands to take them up in their backline included The Kinks, Rolling Stones, Yardbirds, Billy J. Kramer, and the Dakotas, the Swinging Blue Jeans, and Peter Green played one for a time with Fleetwood Mac in 1968. Even so, American guitarists would more often scramble to acquire AC30s… and sometimes wind up with odd solid-state alternatives made by Thomas Organ, as the craze for Beatles-certified gear drove the supply and demand ratio off the charts. Still, if you wanted it big, you wanted it clean, and you wanted it Vox, the AC100 was the amp to beat – and would most definitely get you heard.