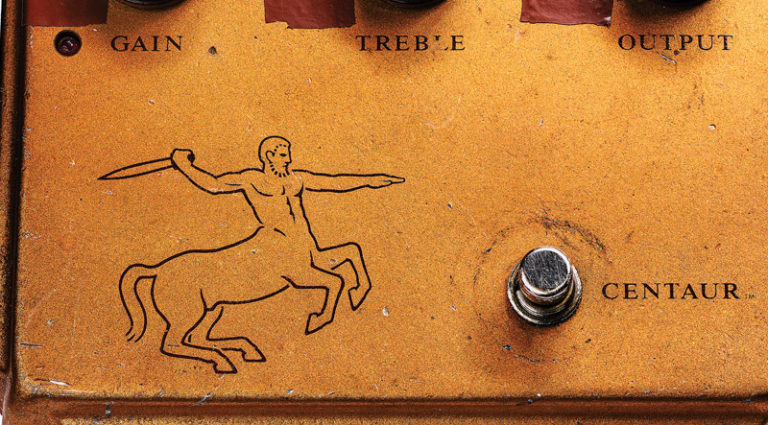 Stompboxes inspire their own special mania. While the allure of guitars is obvious with their colorful, curvaceous looks, effects are (usually) basic boxes covered in a toad’s load of warty knobs and switches.

In many ways, though, the sound of rock and roll is the sound of a stompbox. Scotty Moore may have made a basic guitar-and-amp rig sing on the primal Sun Records sides with Elvis, but once Keith Richards cranked up his Maestro Fuzz-Tone on “(I Can’t Get No) Satisfaction,” music was never the same. As Rage Against the Machine’s Tom Morello eulogizes his Big Muff in Eilon Paz’s glorious new book, Stompbox: 100 Pedals of the World’s Greatest Guitarists, “Before I stepped on it, I had never made rock and roll, but the second I stepped on it, I was rock and roll, and I haven’t looked back.”

Photographer Paz doesn’t bother trying to convert doubters. Instead, his hymn to the lowly stompbox preaches to the choir. He spent four years traveling the world to photograph the artist pedals featured in Stompbox (and the companion Stompbox Vintage & Rarities) while editors Dan Epstein and James Rotondi wrangled prose from an array of knowledgeable writers including Michael Ross, Anna Blumenthal, Katherine Turman, and Chris Buono.

What started him on this project?

“My older brother got a guitar and my middle brother got the drums, so I was left with that legendary rock and roll instrument known as the recorder,” he said with a laugh.

Happily, though, he also picked up a camera, and along with portrait and travel photography has focused on the obsessed; his 2014 book, Dust & Grooves: Adventures in Record Collecting, was a five-year journey into the heart and soul of vinyl fanatics. Turning his lens to stompboxes seems a suitable sequel.

Not surprisingly, several artists had a tough time choosing just one fave. Perhaps surprisingly, some gave away “secrets” to their sound by including markers for preferred settings.

Finally, the project had one unexpected helper – the Covid pandemic.

“Since artists were off the road and had time to kill, it was easier to get the interviews,” says Paz. “Alex Lifeson was one of my Holy Grails, and he even sent me his chosen pedal to photograph!”

Here, we offer abridged examples from the book. 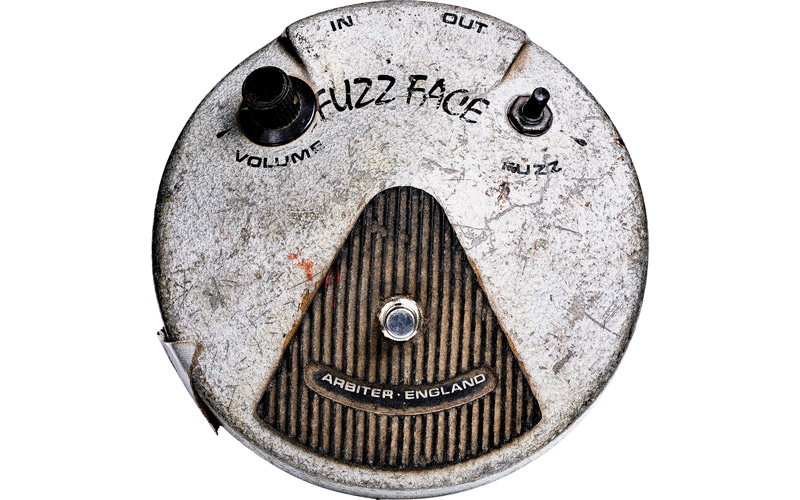 “I’ve never tried to establish one sound as a guitarist,” Jimi Hendrix insisted in a 1967 interview. “You always knew it was Chuck Berry or Duane Eddy or Bo Diddley when they played. But I’m trying to get new things all the time.” The first fuzz pedal Jimi ever owned was an Arbiter Fuzz Face, which he bought shortly after moving to England in autumn 1966. Hendrix went through numerous Fuzz Faces over the years: not only were they were often damaged or stolen, but the quality of the components was notoriously inconsistent – especially the germanium transistors, which could be maddeningly sensitive to fluctuation in temperature. According to pedal guru Roger Mayer, Hendrix would buy several Fuzz Faces at a time, which he and Mayer would then test; the “good ones” would be marked and set aside, while Mayer would tweak the others. This original Hendrix Fuzz Face still contains its original circuit. 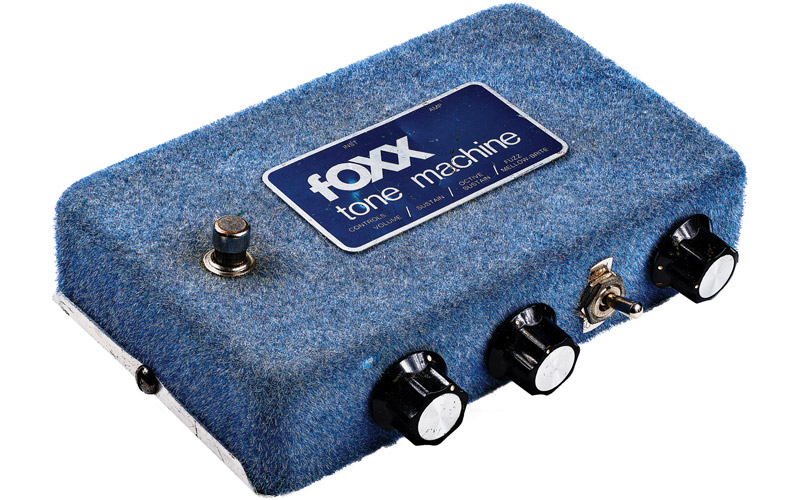 Adrian Belew has long been a pedal poster boy. When he started out, though, there were not many pedals available. “I found this little fuzzy box, and said, ‘Look at this. There’s a fuzz pedal, and it’s actually got fuzz on the box – how clever.’ I plugged it in, and there it was – it sounded just like ‘Purple Haze’.” Released in 1971 by Steve Ridinger, the Foxx Tone Machine came with an indoor/outdoor carpet covering offered in a range of colors. The Foxx made its debut on Belew’s first solo record, 1982’s Lone Rhino. “And ever since then, it rears its fuzzy head on [many of] my records.” 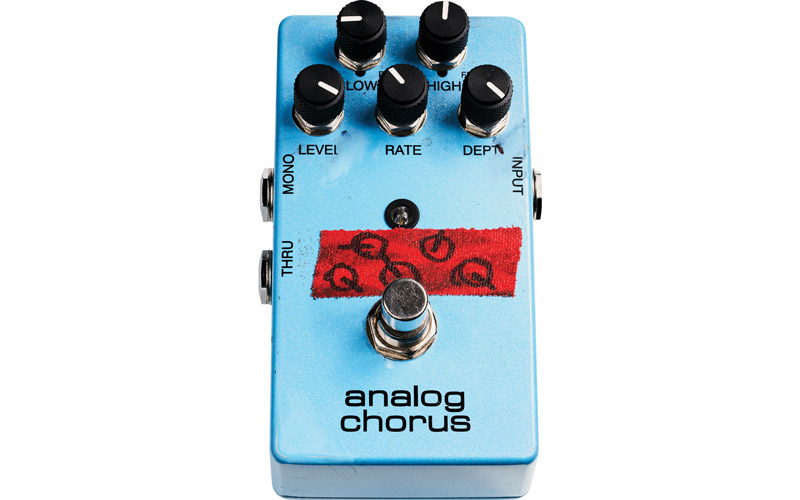 “In the Runaways, I was still developing my own style as a guitar player,” Ford recalls. “So I wanted to master the art of playing guitar before I added any pedals, ya’ know? I feel like pedals are, in a way, an added luxury to playing. It’s like having heated seats in your car. You’ve got to learn how to drive first. It’s not enough to just push a button and have a sound come out – you have to learn how to use that effect.” Once she began her solo career, she started exploring the benefits of effects. “The MXR M234 adds a real nice chorus effect to what would ordinarily be just a plain chordal picking pattern. It adds a bit of warmth and dimension to those chords.”

Peter Frampton is best known for his 1976 blockbuster, Frampton Comes Alive! And that best-selling live album is famous for Peter’s talk-box solos in songs like “Do You Feel Like We Do” and “Show Me The Way.” The first roadworthy talk box was designed by Bob Heil in 1973, specifically for Joe Walsh. Frampton recalls: “I eventually got one of the first Heil Talk Boxes as a gift from my girlfriend, via Bob himself, right around Christmas in 1974.”

The guitar’s signal is fed to the box, and a player shapes their mouth to produce vowel and consonant sounds in order to make the guitar “talk.” “It’s a funny sound,” Frampton says, “so it’s hard to be overly serious when you’re playing it.” 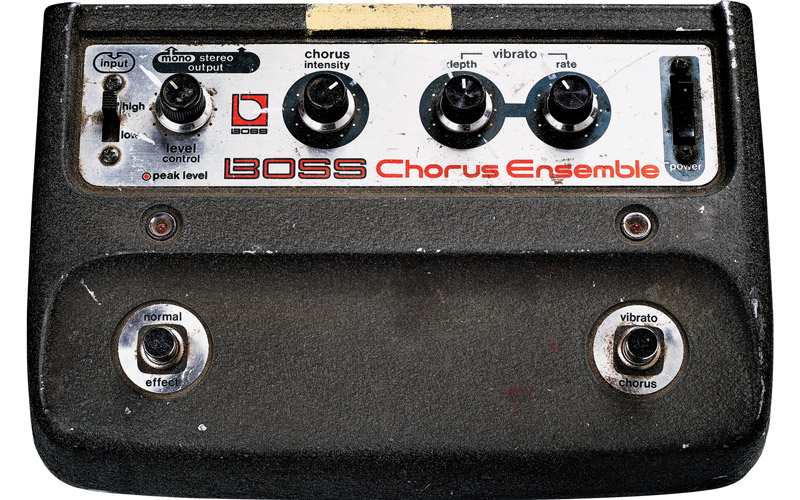 “I’ve always been interested in how to manipulate the guitar sound, how to enhance it and make it bigger than a guitar normally would be – the character of it, and the size,” says Alex Lifeson. “Especially in Rush, I was always looking for ways to fill things out, because [bassist] Geddy [Lee] and [drummer] Neil [Peart] were such active players. Sometimes, I felt like you needed a grounding in the melody. And that was great for me, because it taught me how to explore chordal structure, and how to get the most out of a note, in terms of an ensemble.” When he first heard a chorus effect, he remembers feeling, “Oh my god, this is amazing! And then I bought the Boss CE-1 and started using it on everything!” 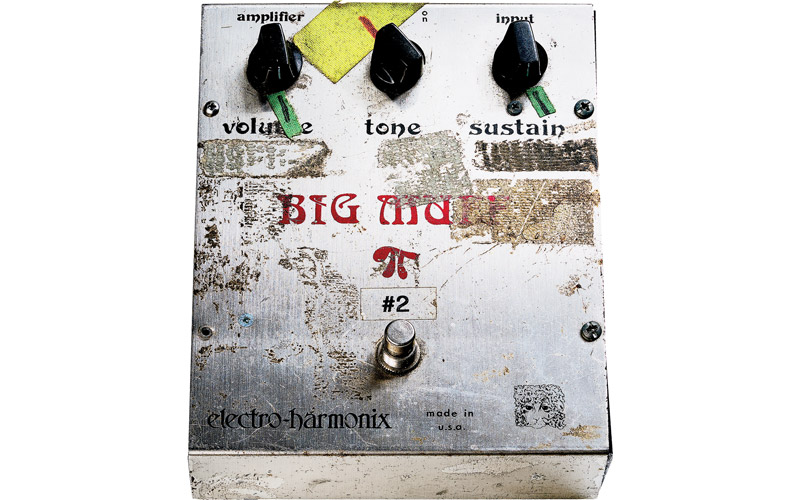 J Mascis is a man of many stompboxes, and his pedalboard alone weighs 70 pounds. “It’s just part of playing guitar to me,” says the Dinosaur Jr. leader. “It was all one thing – the pedals and the guitar and the amp.” In trying to mimic Ron Asheton’s iconic fuzz attack on the first Stooges album, Mascis created an instantly recognizable sound of his own rooted in the full-throated roar of vintage Big Muffs. While he currently has some 50 pre-1976 Big Muffs in his collection, he says the mid-’70s “Ram’s Head” edition he’s been using since 1985 is the best-sounding of the bunch. 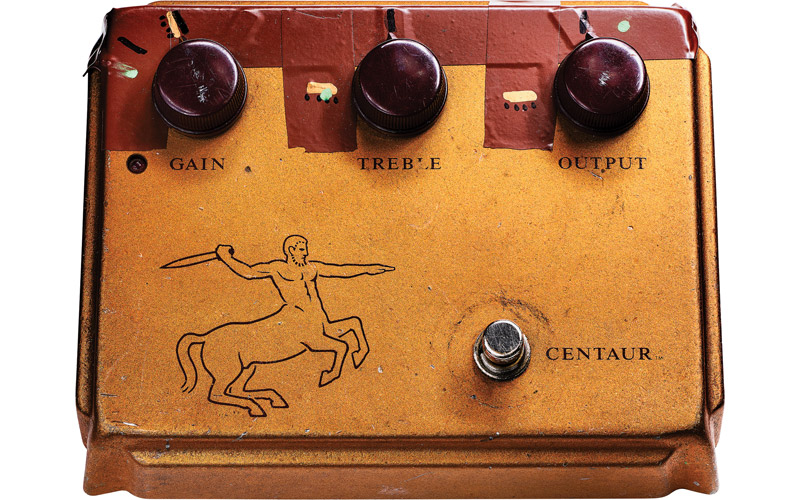 The Klon Centaur is perhaps the most legendary stompbox to emerge from the early boutique-pedal boom of the ’90s. Aerosmith co-founder Joe Perry usually takes the stage with two Klons – a Centaur and a KTR. “If I’m going to go up and do a TV show, or just had to choose one pedal, my Klon Centaur is the one I’ll take. It’s the most versatile pedal I own, and can make a great guitar sound even better, or different. In the course of Aerosmith’s set right now, I’m sure it’s on probably 80 percent of the time.” 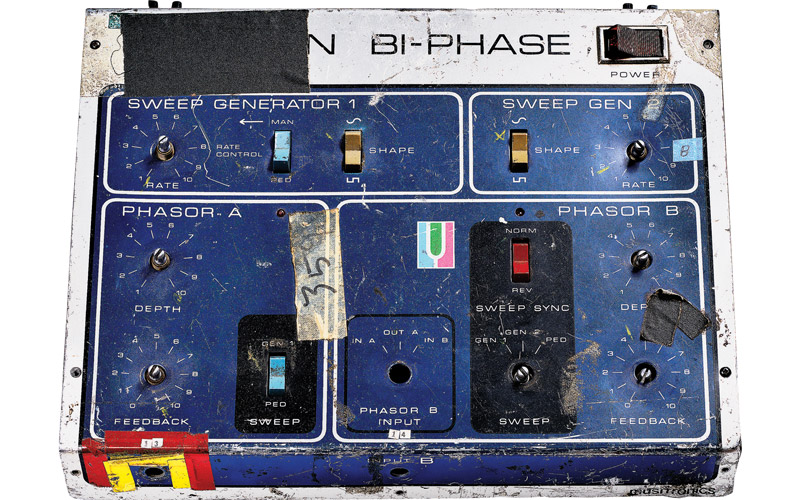 It’s little wonder that the leader of the Mothers of Invention would in turn employ a wide range of pedals in inventing his own music. “I remember seeing the Bi-Phase sitting around the studio,” says Dweezil Zappa, Frank’s eldest son and keeper of his musical legacy. “It was a stock unit. Though it was pretty beat up – knobs missing and such – it wasn’t modified in any way.” Introduced in 1972 by Musitronics, the Mu-Tron Bi-Phase is regarded by many as the ultimate phaser. Zappa used it on songs like “Penguin In Bondage” from Roxy & Elsewhere and “Pink Napkins” from Shut Up ’n Play Yer Guitar. Explains Dweezil, “What’s good about the Mu-Tron Bi-Phase is its ability to sweep through a frequency range that’s never harsh, even at the extreme points of the modulation cycles. Unlike most phasers, there was something about the character of that sound that never wreaked havoc in Frank’s chain.”