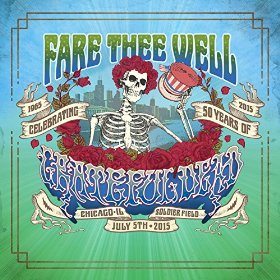 The hubbub over the Dead’s final runs of shows has finally quieted down, only to be replaced by the expected array of video and sound recordings of the events. And the various packages are equally monumental in scope, from the basic three-CD, two-DVD set to the online-only 12-CD, five-DVD extravaganza.

For the shows, the core four reunited: guitarist Bob Weir, bassist Phil Lesh, and drumming duo Mickey Hart and Bill Kreutzmann. They were filled out by Phish guitarist Trey Anastasio (replacing Jerry Garcia), plus Jeff Chimenti and Bruce Hornsby on keyboards (standing in for several passed past players).

Either way – or picking one of the other in-between packages on offer – you can call it epic. The shows were long, especially long. After all, there was a lot of ground – and songs – to cover.

Sonic quality is superlative: the Dead knows how to bootleg itself, as they’ve proven. And the video includes all sorts of behind-the-scene goodies to make you feel like you were there.