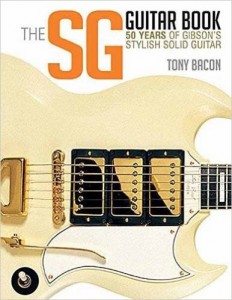 Whatever were they thinking? In hindsight, it’s tough to fathom how Gibson could scrap the Les Paul Standard at the end of 1960 and replace it in ’61 with a new design, the SG, or Solid Guitar. But, as prolific guitar scribe Tony Bacon reminds us, demand for the Les Paul was dwindling and Gibson hoped to “modernize” sales.

In the years since, the SG has been eclipsed in the spotlight by the better known and beloved Les Paul Goldtop and ’burst. It’s a similar situation to the Fender Jaguar/Jazzmaster, overshadowed by the Tele and Strat. But of course this isn’t all bad: Prices have remained sane for SGs that many diehard fans recognize as phenomenal axes.

Bacon’s new book finally gives the guitar its due. Similar to his other books in this series, it’s packed with solid history and hundreds of B&W and color archival and specially shot photos. All the many variations are included: the classic Standards, Specials, Juniors, double-necks, Customs, TVs, as well as the lesser-known Tributes, Deluxe, Supreme, and Diablo, plus related guitars such as the Melody Maker and signature models from Robby Krieger to Jimmy Page.

Yes, this book might enlighten the rest of the vintage guitar world to SGs, but you can’t blame Bacon. The guitar’s use by fabled players from Les Paul himself to Buddy Guy, Page, Pete Townshend, Frank Zappa, Angus Young, Tony Iommi, and Derek Trucks has led the way. 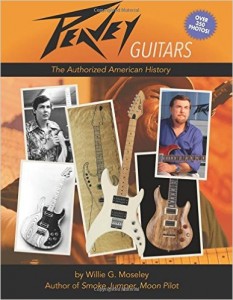 VG contributor Willie G. Moseley’s history of Hartley Peavey’s wares sheds similar light on guitars that are workhorses at gigs around the globe. Based in Meridian, Mississippi, Peavey began in the late ’60s building durable amps and sound systems – many of which are still solidly at work – before venturing into guitarmaking.

He launched his first CT-1 guitar and CT-B bass in ’77, which evolved during a lengthy, three-year development period into his T-60 and T-40, respectively. From there, a dazzling range of models ensued, often including innovative circuitry.
Authorized by Peavey and chock full of hundreds of B&W images, this is a must for Peavey aficionados.