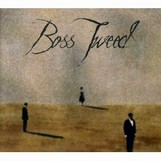 Boss Tweed has taken rockabilly to the big city. The New York power trio was formed in 2004 with all the requisites: minimalistic drum kit, thumping bass, and a fire-engine-red Gretsch archtop.

But this ain’t your grandpappy’s rockabilly. As the band states, their influences are as diverse as the cities they were born in – Nawlins, Chicago, and a town with no traffic light somewhere in New Jersey. Boss Tweed tweaks their rockabilly, adding jazz, blues, lounge, and soul.

The band is led by guitarman and singer Gerard Egan with drummer Eric Reed providing a wide-ranging array of percussion and rhythm styles. Yet it’s bassist and lead singer Carolyn Sills that’s the front voice of the band. Added together, Boss Tweed reverberates through your heart like the Johnny Burnette Rock and Roll Trio fronted by Billie Holiday.

When the band’s eponymous debut CD arrived in 2005, we raved about the band’s loungey rockabilly. Now, they’re back with a vinyl EP featuring two stellar tunes.

The band’s original “Buzz Like Houseflies” is a romp, pure and simple. This is rollicking rockabilly with plenty of reverb and twang. And yet Sills’ soulful vocals injects a twist that makes it all new.

The flipside is a cover of “Perhaps…” The ballad becomes a séance set to melody, conjuring up a misty past of dim juke joints and neon-lit roadhouses from the end of time. The effect is mesmerizing.

This isn’t Wanda Jackson, or even the Reverend Horton Heat. Instead, Boss Tweed rules on its own terms.