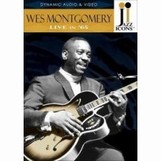 Jazz guitar was forever split into two schools early in its development, each defined by a stylistic genius – the bop-anticipating, electric lines of Charlie Christian and the acoustic swing of Gypsy Django Reinhardt. If there is a third headmaster, even though he began as a Christian devotee, it would be Wes Montgomery.

If you’re familiar only with Montgomery’s orchestrated, crossover successes, like the Grammy-winning Goin’ Out Of My Head album or the hit single “Windy,” this is a great place to discover the guitarist smoking in a small combo setting.

Considering the level of commercial success he attained (in the jazz world at that time, comparable only to Stan Getz, Louis Armstrong, Dave Brubeck, and few others), there is scarce film documentation of Montgomery. This installment in the “Jazz Icons” DVD series bookends five songs from Belgian TV (previously released in low-budget form; remastered here in all its glory) with sessions taped during the same 1965 European tour, in Holland and England, previously unavailable on video.

The Dutch footage is a rare treat. The setting is intimate and casual, but production is top-drawer – with multiple camera angles, including an overhead crane. Wes, then 40, is teamed with a very capable local rhythm section, and we see him talking, laughing, and obviously having a blast. As Pat Metheny writes in his extensive liner notes, this is possibly “the most extensive footage of him talking and just hanging out that there is.”

Montgomery shows the group the Edward Redding ballad “The End Of A Love Affair,” discussing its harmony with pianist Pim Jacobs (putting to rest, Metheny notes, any notion that he was some sort of self-taught savant). After experimenting with various rhythms, the four settle on an uptempo approach, and soon Wes is flying. Likewise, in the improvised blues that begins the set, Wes establishes the groove in the first chorus, the band joins in on the second, and by the third, Wes is swinging his ass off.

The aforementioned Belgian broadcast has a decidedly different feel due to the American rhythm section of Harold Mabern (piano), Arthur Harper (bass), and Jimmy Lovelace (drums). They’re tighter, more adroit, and had also recently accompanied Montgomery at New York’s Half Note. The set – including John Coltrane’s “Impresions,” a bossa nova take on “Here’s That Rainy Day,” and Wes’s speedy “Jingles” – is polished, the musicianship first-rate, but it lacks some of the freedom of the looser Dutch jam.

As before, Montgomery is playing his single-pickup L-5 through a Standel amp, achieving a tone that’s warm but clear and defined – in soaring single-note passages and Montgomery’s trademark octave runs. As always, he plucks the Gibson with his thumb, and there are some great close-ups, illustrating the various techniques he employed.

Metheny refers to the last segment, taped in England, as “restrained” – which is generous. There seems to be no interaction between band members (pianist Stan Tracey rarely looks up from his sheet music), and the mood isn’t eased any by host Ronnie Scott talking about Montgomery, rather than to him. Not surprisingly, the best performances are the unaccompanied intro and outro of Wes playing “West Coast Blues” – this time with some revealing over-the-shoulder camera angles.

Sadly, Montgomery died of a heart attack only three years after these performances. As Carlos Santana says in the booklet notes, he possessed “an unbounded imagination and the ability to transcend thought into music that remains unequalled.”


This article originally appeared in VG‘s Nov ’07 issue. All copyrights are by the author and Vintage Guitar magazine. Unauthorized replication or use is strictly prohibited.
src=”http://www.youtube.com/v/CitdNu4xVLI&hl=en&fs=1″ type=”application/x-shockwave-flash” allowfullscreen=”true” width=”425″ height=”344″>
Current Issue