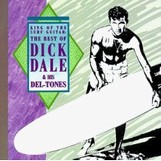 The Rosetta Stone of Dick Dale’s brand of surf guitar is 1962’s Surfer’s Choice, which, even though it was his first album, was largely a collection of the singles he’d already released on his own Deltone label. Having already reissued that classic on CD, Sundazed now issues the four albums that followed his signing to Capitol.

Throughout his career, Dale split his repertoire between surf instrumentals and R&B vocals, the latter never being his strongest suit. By far the most exciting cut on his first Capitol effort, 1963’s King Of The Surf Guitar, is his speed-picked arrangement of “Hava Nagila,” a nod to his Jewish heritage in the mold of his signature song, “Miserlou.”

The LP’s title track is a takeoff on Duane Eddy’s “(Dance With The) Guitar Man,” even utilizing the same singers, Darlene Love and the Blossoms, while “Break Time” is virtually identical to the King Curtis hit from the previous year, “Soul Twist.” Dale inserts “Apache” into a fierce version of “(Ghost) Riders In The Sky,” and his reverb-drenched tremolo picking on “Mexico” outclasses Bob Moore’s original hit.

The Capitol releases gave his group, the Del-Tones, billing, but King augmented band members with studio aces like drummer Hal Blaine and back-up guitarists Rene Hall, Glen Campbell, and Barney Kessel. By the time of his third LP for the label, Mr. Eliminator, the backing was entirely session men. In between, the studio machinery was showing its presence on Checkered Flag, in terms of a who’s who of sax legends (Plas Johnson, Jim Horn, and Steve Douglas) as well as hot-rod material penned by Gary Usher and Gary Paxton – which Dale doesn’t sound entirely comfortable with. Dale is at his best on “The Wedge” (previously titled “A Run For Life”), which might out-“Miserlou” “Miserlou.”

Eliminator does a better job of balancing the mediocre vocal material (or worse, like the laughable “Squirrel”) with more (and strong) instros, from the title track to another trip south of the border (“Taco Wagon”) to the “Malaguena”-inspired “The Victor.” However, each reissue includes two bonus tracks, and the single-only, Chuck Berry-esque “Wild Ideas” included here is one of Dale’s best.

On 1964’s Summer Surf, his last for Capitol, Dale changes the Coasters’ “Searchin'” into “Surfin’,” and the Little Milton hit “Feel So Bad” becomes “Feel So Good.” There’s more production, although Matt Marshall’s liner-note references to subsequent classics Pet Sounds and Sgt. Pepper’s are a bit much. Phil Spector is a more likely influence, as on the castanet-punctuated “Spanish Kiss,” with Dale switching to acoustic. Steve Douglas’s “Banzai Washout” (also recorded by the Catalinas, the Challengers, and others) is the album’s standout cut.

If Sundazed had compiled only the instrumentals from these four albums (and maybe not even all of them), it would amount to one hell of a CD. Instead, there’s a lot of filler to wade through, but the midline list price makes seeking out the gems worthwhile.