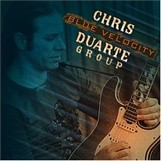 It’s great to hear a plain-old guitar record. They used to be all over the place, but these days not so much. And while I’ve always been a Duarte fan, here he seems to be saying, “Here you go. I’m playing my guitar. Hope you like it.” All songs have at least two solos, the sounds are incredible, and when soloing he can go from subtle to rip-your-head-off loud in a matter of seconds. His rhythm playing is funky and full of soul.
As you’d expect, there’s a lot of blues. “Amy Lee” has a menacing blues-march feel with biting, clever playing, especially in the long solo out. “Hard Mind” is shuffle heaven with Duarte’s wah left half on. He takes chorus after chorus and never runs out of ideas. By the second solo, he’s far enough outside that your ear needs to readjust. “Something Wicked” is a slow blues-guitar throwdown that builds to a stunning emotional blast. To show you how much ground Duarte covers, there’s even some nice octave playing that calls Wes more to mind than it does Jimi.

Speaking of, Jimi-style arpeggios dominate the ballad, “R U 4 Real?” The solos on that track and the rocker “Sun Prairie Blues” let Duarte truly show off his chops.

There are also a number of other cool songs, like the pop-rocker “I’ll Never Know”; loud and brassy, with a great hook and tons of guitar. Duarte’s salvo out brings a yell and laughter from those in the studio. The moment sums up this record perfectly. Anyone who likes blues-based rock guitar will appreciate this. You’ll yell and laugh with the sheer joy of the guitar playing.


This article originally appeared in VG‘s Nov ’07 issue. All copyrights are by the author and Vintage Guitar magazine. Unauthorized replication or use is strictly prohibited.

Chris Thomas King – Me, My Guitar and the Blues