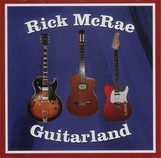 The retitled version of Johnny Gimble’s “Fiddlin’ Around” (“Pickin’ Around”) is a clue, but just going by the repertoire here – encompassing Jobim, Bonfa, Villa Lobos, Cole Porter, and Charlie Parker – one would never suspect that the guitarist/leader’s main gig has been backing country star George Strait for 24 years. That is, unless you live in Austin and have seen McRae’s dazzling fretwork up close in various settings.

“Consummate” would not be an overstatement in describing McRae’s skill and versatility. It’s also a testament to Strait’s own high standards, as well as the professionalism it takes to land and keep a gig like that for so long.

McRae reaches for his ES-175 for a darker tone on a burning rendition of “Crazy Rhythm,” but gets a rounder tone via his Telecaster (as on Porter’s “You’d Be So Nice To Come Home To”) when he’s not playing his Takamine electric classical model. Jimmie Dale Gilmore’s “Tonight I Think I’m Gonna Go Downtown” gets a fascinating gut-string/steel-string duet makeover.

McRae is also featured on The Real Deal (Catfish Jazz) by another Austinite who deftly straddles jazz and Western swing, vocalist Maryann Price. On this fine self-produced session, she reprises “I’m An Old Cowhand,” her ’70s hit with Dan Hicks & His Hot Licks, and duets with Ray Benson on a rendition of “Mr. Bassman” that’s a riot, but also extremely hip.