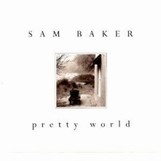 It’s hard to classify Austin’s Sam Baker as a singer/songwriter. Not because his songs are well-written – they’re often brilliant, invariably memorable. But Baker’s raspy, barking delivery barely qualifies as singing. It may be unconventional, but, like the songs themselves, it makes an impression.

In 1986, Baker was on a train, traveling through Peru, when a terrorist bomb blew up the car he was in, killing several passengers. Baker was injured and temporarily deafened, but spared. During and since his recovery, he has devoted himself to the art of storytelling, first in short stories, then songs.

The stark instrumentation is impressive without being showy – the core band featuring Rick Plant on guitar, co-producer Walt Wilkins on acoustic, and Mike Daly on slide and steel augmented by accordionist Joel Guzman and guitarist Gurf Morlix (on “Juarez”) and Lloyd Maines’ Dobro (on “Slots”).

After half a dozen mostly acoustic tunes, the choppy, punkish rhythm of “Psychic” (provided by Tim Lorsch’s layered mandolins), power chords, and whining steel come out of nowhere, but then morph into an beautifully orchestrated section of violins and cello.

Of the various compliments to be paid to Baker, the highest is that his music is truly different and succeeds on its own terms. In an increasingly homogenized music world, something this original is a rare treat.