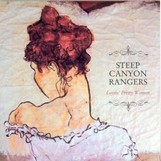 The Steep Canyon Rangers are part of a new wave of young bluegrass bands that turn the energy past hot to fricassee. In 2006, they won the International Bluegrass Musician’s Association’s “Emerging Artist” award based primarily on their incendiary stage show.

Even though Lovin’ Pretty Women is a studio album, it captures much of the band’s live fire. Their take on the Dead’s “Don’t Ease Me In” moves the song closer to Western swing than the original, and their version of Shawn Camp’s “Ain’t No Way of Knowin'” remains much closer to the original’s pace with only a bit more sideways swing. Although they can play as fast and hard as any band, the Steep Canyon Rangers don’t do everything with balls-to-the-wall speed. The Mike Guggino original “Kuykendall” could have been performed much faster, but the pace gives the song room to shimmy.

Some bluegrass bands, such as Doyle Lawson’s band Quicksilver, are great vocalists who also happen to be good pickers, while others like The Grascals are hot players who can sing. The Steep Canyon Rangers sit smack in the middle. Graham Sharp and Woody Platt are strong lead singers and fine harmony vocalists. On the instrumental side, Sharp’s banjo, Mike Guggino’s mandolin and Nicky Sander’s fiddle solos all contribute to the band’s volatile performances. Sanders’ boyish good looks and onstage theatrics match his virtuosic double-stop fiddle work. But despite stiff competition, Graham Sharp emerges the most fascinating member of the band. His stage presence has the intensity of a smoldering hunk of coal about to burst into flame.