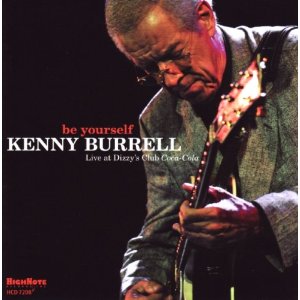 Consistency has always been one of Kenny Burrell’s hallmarks – as in consistently great. Ironically, he’s almost taken for granted because of it.

He was Duke Ellington’s favorite guitarist, cut his first session with Dizzy Gillespie, worked with artists ranging from Coltrane to Jimmy Smith (his Blue Bash collaboration with the latter tops Wes Montgomery’s recordings with the organist), and influenced greats from George Benson to Stevie Ray Vaughan. But he’d no doubt elicit more hushed-toned awe if he’d struggled with substance abuse, with his output reflecting the highs and lows that accompany it, a la Grant Green, and be recognized for the virtuoso that he is if he’d released an album (or three or four) with that title.

That Burrell has never made a “comeback” – because, from his 1956 solo debut (at age 24), he’s cut one fine album after another – speaks volumes. Now pushing 80, he maintains that high standard on this addition to his catalog. Cut live in a quintet format, it opens with a groundbreaking Latin tune associated with the legend the venue is named for, “Tin Tin Deo.” Next up is the sprightly “Raincheck,” from Ellington’s repertoire, composed by his longtime arranger, Billy Strayhorn. Both amply demonstrate Burrell’s facility, spontaneity, and innate swing, as does a full-throttle take on Kenny Dorham’s “Blue Bossa.”

For “Listen To The Dawn,” Burrell’s own minor-key ballad, Tivon Pennicott handles the theme, switching from sax to flute. He and the rhythm section of bassist Peter Washington, Benny Green (one of the few pianists who can list Oscar Peterson in his resume), and Clayton Cameron (drummer of choice for everyone from Sammy Davis, Jr., to Cyndi Lauper) push their leader to ever-greater heights, as he does in return. The original title tune, however, showcases Kenny alone – with his constant companions: soul and lyricism.