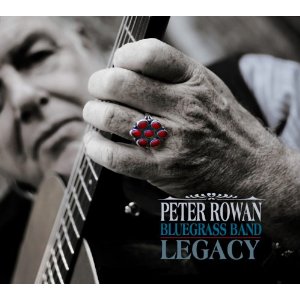 Peter Rowan has been the front man for bluegrass icons including Bill Monroe and Tony Rice. On Legacy, he’s still a front man, but shares the spotlight with Jody Stecher, who’s better known as an old-time player than a bluegrasser.

The results are both a trip back to an era when bluegrass was still just a twinkle in Bill Monroe’s eye and a fastforward to a new acoustic paradigm.

The principal players here are Rowan, Stecher, Keith Little (on banjo), and Paul Knight (bass), originally brought together by Knight for a one-shot gig that worked very well.

Legacy is very much a collaboration of equals. Although Rowan contributes eight original songs while Stecher only adds two, both share primary vocal duties. The results aren’t slick like Doyle Lawson and Quicksilver, or instrumentally pyrotechnic like the Punch Brothers. Instead, Legacy captures the rustic and organic side of bluegrass, with the focus on emotion rather than perfection.