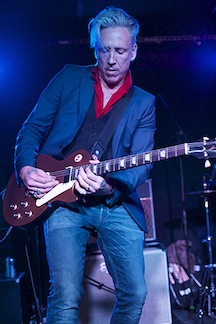 Guitarist/composer Adam Roth passed away December 16 after a brief battle with cancer. He was 57.

The son of cartoonist/illustrator Arnold Roth, he moved to New York City in 1979 and joined his brother, Charles, in a series of punk bands that gigged in renowned venues like CBGB and Max’s Kansas City. In the ’80s, Adam was a member of the Del Fuegos and a band fronted by poet John Giorno, and he later collaborated on several albums with comedian Denis Leary, including as co-writer of music for the FX network program “Rescue Me” and Leary’s sitcom “Sex&Drugs&Rock&Roll.” In 1994, the pair launched the annual Comics Come Home show, which raises money for The Cam Neely Foundation for Cancer Care. Roth also worked with Basketball Diaries author Jim Carroll, and most recently, he and Charles were members of the Liza Colby Sound.

Roth was known for his stage presence and his quick wit. He is survived by his partner, their son, his brother, and his parents.