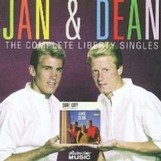 Last month’s “Hit List” review of the Beach Boys’ U.S. Singles Collection: The Capitol Years (1962-1965) pointed out that, as great as the music is, what your $132.95 list price really goes toward is fancy packaging. As if to illustrate this point, Collectors’ Choice compiled the 21 singles Jan & Dean cut for Liberty (42 songs, which is five more than the Beach Boys set) into a two-CD set that lists for $27.98.

Granted, Jan & Dean don’t hold the lofty position, artistically, that the Beach Boys do (Rolling Stone once said they played Spike Jones to Brian Wilson’s Beethoven – which isn’t fair to Jan & Dean or Spike Jones), and that’s a shame, because their work deserves more scrutiny and respect.

Up ’til now, their singles (the medium in rock’s pre-album consciousness) have never been properly or completely anthologized, although there are various collections with substandard stereo mixes. This set sidesteps that problem by removing any subjectivity (this is all the singles, period) and presenting the work the way it was originally intended to be heard out of transistor earplugs and car radios – in glorious mono.

The program begins with 1962’s “A Sunday Kind Of Love,” finding the duo still trading on their earlier doo-wop success from hits like “Jennie Lee” and “Baby Talk.” It’s not until track 11 that they were given a new lease on life thanks to Brian Wilson’s co-write (and high harmony vocal) on 1963’s “Surf City,” riding the sports/music craze the Beach Boys had forged.

Unfortunately, other than being lumped together as the “Wrecking Crew,” the L.A. studio musicians who played with a mix of precision and spirit on hits like “Honolulu Lulu,” “Dead Man’s Curve,” “Drag City,” and “The Little Old Lady (From Pasadena)” aren’t listed individually. (The contracts for these dates are sitting in the union archives, you know.) Dean Torrance crediting partner/producer Jan Berry for virtually creating the Wrecking Crew is a bit of an overstatement (same case could be made for Duane Eddy), but guitarists Glen Campbell, Tommy Tedesco, Bill Pitman, Billy Strange (and session honchos like Leon Russell and Hal Blaine) did some of their best pop-rock work here.

Steve Khan – Got My Mental