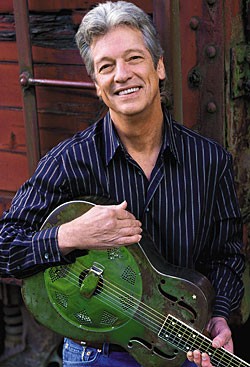 John Hammond has been in the music business for 44 years and is respected and revered by colleagues everywhere. So it may be a surprise to hear that he has never been much of a writer – until now.

His funky, gritty new record, Push Comes to Shove, contains five Hammond compositions, by far the most he has ever written for a record.

“Well, I wrote a bunch, when I was starting out. But the songs were all kind of corny,” he said. “And I knew a lot of great songwriters – people like Bob Dylan, Phil Ochs, John Sebastian, and Tim Hardin, and the songs just seemed to flow out of them. I knew lots of great songs by other writers and I felt my calling was more of a traditional bluesman than songwriter.” But with the new record, Hammond says he “just is beginning to feel his oats.”

Hammond says a number of things have teamed up to get him writing more. His wife Marla, who he calls “my partner on this adventure,” his producer for the record, youngster G. Love, and Tom Waits, who produced Hammond’s 2001 gem Wicked Grin, which contained all Waits songs.

“I’d never put myself in his class, obviously, as a writer. But he really is an inspiration.”

Hammond has known Waits since the 1970s, when Waits opened a show for Hammond in Arizona. “I watched him, and was just mesmerized. I didn’t want to go on after him. He was truly extraordinary. I did play, though, and he came backstage and told me he’d been of fan of mine since he was in high school. We became friends.”

The idea on Wicked Grin was to do songs by various songwriters they both liked, but it evolved into something else. “We only had a week to rehearse and nobody could make the rehearsals except me,” said Hammond. “When it came time to record, I asked him for a song. He came up with ‘2:19’ and we did it in one take. Tom flipped. And after that, it just sort of happened.”

As for the new record, Hammond says the label wanted him to work with a new or different producer, but his wife suggested his friend G. Love. “He’s a fan of mine, and we know him as a person because we toured together about 10 years ago. His audience hated me, and my audience hated him!”

Hammond says they recorded the tracks in five days, mixed it in two days, and on the ninth day, mastered it.

“We found this old studio in West Orange, New Jersey. It was built by Frankie Valli, and was really rudimentary. But it sounded great. And the price was right.”

As luck would have it, the parent company of Back Porch Records then went out of business. But the project was picked up by Blue Note, which kept the Back Porch name going.

Anyone familiar with Hammond’s long career won’t be surprised to hear that he was influenced by the blues beginning at a young age. 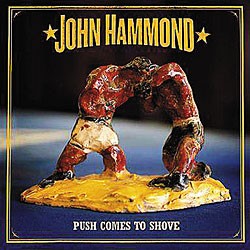 “When I was 11 or 12, Pete Seeger had a radio show and would play Leadbelly, Sonny Terry, Brownie McGhee, Josh White… artists like that. For whatever reason, I got into the blues. I also liked rock artists like Chuck Berry and Bo Diddley, and they were on Chess Records and on the back of the records it would say to look for other Chess artists like Muddy Waters and Howlin’ Wolf, so I began to discover the Chicago Blues scene. And then in 1957, I heard the Folkways album The Country Blues. I got a guitar at the age of 18, and started playing professionally at 19.” At the time, he was living in Yellow Spring, Ohio, attending Antioch College. “There were guys I’d watch at the school, like Ian Buchanan. And Jorma Kaukonen was there, too.”

Hammond is usually considered an acoustic guy, and he started with Gibsons. “My first guitar was a J-100. It had a hole punched in the face, but sounded great. I got a J-45 after that and used that for years. In the early ’80s, I bought a really great Martin M-36 with an arched back and a big full sound that I found very dynamic. It was stolen, along with a National I had, so I replaced it with a Martin M-18 that I still have.” Hammond also has a guitar made in England by Vinnie Smith. “It’s sort of styled after a Martin 000, but it’s got a huge bass sound. Vinnie had me play it backstage in the early ’90s. It’s just a great guitar.”

When he’s playing acoustic, Hammond doesn’t use any amplification, preferring to lower a microphone. And he has gone through some fine electrics in his time, too. “I had a ’53 Gibson Les Paul when I had put a band together. Eventually, the band had to break up, and I gave the guitar to Jimmy Thackery. I also had a Gibson Byrdland in the ’60s, which I sold. I didn’t have an electric for a long time, and then bought a ’59 Gibson ES-330 that I use for recording. On Wicked Grin, I borrowed Larry Taylor’s Harmony Stratotone. It’s often referred to as ‘the paddle,’ but it had a great recording sound and great action.”

So, how does Hammond sum up over four decades in the music business? “I work 12 months a year and go all over the world,” he said. “We’ve had some fantastic experiences. Plus, I’ve been around a long time. I’ve gotten to know some phenomenal folks and watched them grow. And hopefully, I’ve done some growing, too.”


This article originally appeared in VG‘s March 2007 issue. All copyrights are by the author and Vintage Guitar magazine. Unauthorized replication or use is strictly prohibited.