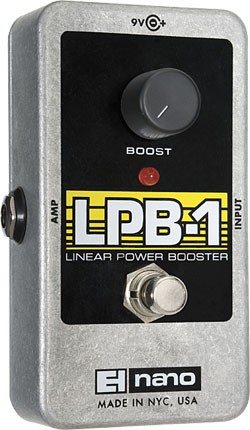 Renowned guitar-effects builder Electro-Harmonix recently introduced a handful of its most popular pedals, along with a couple of more modern options in its new Nano Series of effects.

The point of the effort is to offer the same vintage and classic E-H effects loved by so many players in boxes that suck up a whole lot less real estate on a pedalboard. There are seven old favorites (the Nano Clone chorus, Nano Small Stone phase shifter, Dr Q envelope filter, Bass Balls/envelope filter, LPB-1 Linear Power Booster, Metal Muff, and Muff Overdrive) and two other boxes (the Switch Blade a/b box and Soul Preacher compressor/sustainer) in the Nano series, all housed in die-cast budboxes that measure 4.25″ x 2.25″ x 1.25″.

We tried two of the Nano series pedals – the LPB-1 and the Soul Preacher – with a single-coil Gadow Nashville (see review in this issue) teamed with a Chicago Blues Box Roadhouse amp (12AX7/6L6) running into a Hard Truckers Fatty 2×12″ cabinet and a humbucker-loaded Ibanez Artist teamed up with a Koch Twintone II (12AX7/EL34) 1×12″ combo.

First up was the LPB-1, which uses a single Boost knob, old-school bypass stompswitch with LED indicator, chassis-mounted 1/4″ in/out jack, 9-volt DC power jack and the same circuit as the original. The LPB-1 produced an even, transparent clean-tone boost to the Gadow/Roadhouse setup, adding punch and clarity without changing the overall tonal character of the guitar or amp. The LPB-1 also worked well as a gain boost in front of the Koch’s overdrive channel, driving the preamp tubes harder and helping create a more aggressive saturated distortion tone. 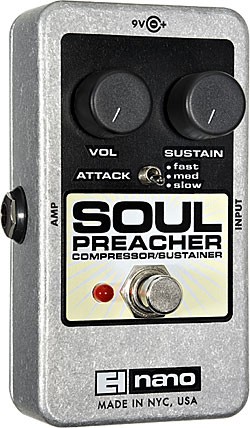 The Soul Preacher uses controls for Level and Sustain (which adjust the amount of compression) and a three-way toggle to set Attack (fast/medium/slow). Through the Gadow/Roadhouse setup, the Soul Preacher produced an excellent “squashed” chicken pickin’ sound with the Sustain set at 3 o’clock and the Attack set to fast. The unit’s compression circuit levels the sound and compresses the dynamics enough to punch up the mids and fatten the overall tone without over-compressing high-end response.

Through the Ibanez/Koch setup, we set the Soul Preacher’s Sustain control at 10 o’clock, for less compression and more volume/gain boost, the Volume about halfway, and Attack switch set at the slow setting. The resulting overdrive tone was fatter (especially with full chords) with more sustain – and it didn’t kill all the dynamics.