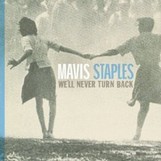 Billed as her most personal statement, this may well be Mavis Staples’ finest solo effort to date. In 2004, the powerhouse lead singer of the famed Staple Singers released the rootsy Have A Little Faith on Alligator. Here, producer/guitarist Ry Cooder places the reigning queen of gospel’s voice in an even more intimate setting, paring the instrumentation down to the bare essentials.

But it’s the repertoire that makes the album so personal, not to mention riveting. She goes not just back to the church but back to the type of “freedom songs” that made the Staple Singers an inextricable part of the Civil Rights Movement of the ’60s – as Rep. John Lewis writes in the liner notes, “the soul of that revolution.”

Just as her family band had something to say then – with songs like “Why Am I Treated So Bad,” “Long Walk To D.C.,” and the hit “Respect Yourself” – Ms. Staples mixes traditional gospel tunes and originals to comment on the state of things in 2007.

The program opens with the biting social commentary of unsung blues poet J.B. Lenoir’s “Down In Mississippi,” with Ladysmith Black Mambazo providing vocal backing to Cooder’s guitar and mandolin and the heavy backbeat of his constant collaborator, Jim Keltner. Mike Elizondo, who played on Cooder’s Chavez Ravine, is back on bass and keyboards, with Ry’s son, Joachim, who provided percussion on the acclaimed Buena Vista Social Club.

Cooder’s big-toned slide leads off a version of “Eyes On The Prize” that will make the hair stand up on the back your neck. But the autobiographical “My Own Eyes” – recalling her father, Roebuck, and Martin Luther King (singing, “If he can preach it, we can sing it”) – is perhaps Mavis’s finest hour.


This article originally appeared in VG‘s Aug ’07 issue. All copyrights are by the author and Vintage Guitar magazine. Unauthorized replication or use is strictly prohibited.