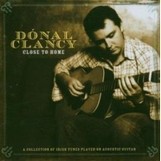 Donal Clancy continues the tradition of the Clancy Brothers, demonstrating that contemporary Celtic music is as vibrant as any musical genre.
Clancy grew up surrounded by traditional Irish music, and all 12 cuts here come from the treasure trove of reels, hornpipes, jigs, and mazurkas that form the backbone of the Irish musical heritage. But instead of sounding like moldy old figs longing for the compost heap, every tune has the vibrancy of a freshly penned melody. Much of the excitement comes from Donal’s performance. He is one heck of a flatpicker, whose technique and tone rivals anyone who’s ever held a guitar. From the first tune (“Tommy Coen’s Memories”), you’ll marvel at his ability to play fast and clean while doing complicated Irish rhythms.

“Lord Inchiquin” was composed for harp, but Clancy uses it to show he’s equally adept at fingerstyle.

Close To Home truly is a solo album. Most cuts have one guitar part – no overdubbing, no multitracking, just one pair of hands and one instrument. And the recording is well-proportioned, with just the right balance of direct and reflected sound, to create a realistic image of a guitar played in a good-sounding room. Some cuts have the faintest background noise, but it only adds to the reality of the recording. If you enjoy well-played solo acoustic guitar, Close To Home will keep drawing you in.


This article originally appeared in VG‘s Apr. ’07 issue. All copyrights are by the author and Vintage Guitar magazine. Unauthorized replication or use is strictly prohibited.