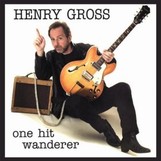 Henry Gross’ 2001 release, I’m Hearing Things, was one of the most pleasant musical surprises of the past 10 years. Now he’s back with a set of songs from a one-man show that highlights his career in music. There are 17 tunes, two of which are ringers. You’ll find the original versions of “Shannon” and the wonderful “Mama Who’s Gonna Rock” here, but other than that, it’s Gross playing a lot of instruments, singing wonderfully, and negotiating a trip through his musical career.

For those unaware, Gross was an original member of Sha Na Na. That influence shows up on several cuts here. The boogie of “He Can’t Hol’ Still” and the doo-wop of “You Found Me Out” are treats. “Six O’Clock” is a ’50s stomper that would make Little Richard proud. The ballad “If You Don’t Believe In Me” is the perfect opportunity for Gross to display his voice. It also features a metallic electric-guitar solo that is pure melodic heaven. Several cuts, like “It’s the Money” are horn-driven rock that would sound good on radio, if only pop stations had any sense. It also features some biting lead guitar from a guy who can really play, but never lets the guitar get in the way of a good song. “Sleeping My Way to the Top” is a hysterical, somewhat skewed look at the music business, opening with a quote from “I Heard it Through the Grapevine,” and wrapping with a perfect Stephen Stills imitation of the opening of “Suite: Judy Blue Eyes.” In between is a guy trying, but not quite making it. And “What You Dream,” one of the highlights from I’m Hearing Things, makes an appearance at the end here, as well. Gross’ music is good, old-fashioned pop and rock-and-roll.


This article originally appeared in VG‘s May ’07 issue. All copyrights are by the author and Vintage Guitar magazine. Unauthorized replication or use is strictly prohibited.
The Guide