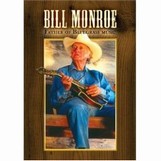 First released on VHS in the mid ’90s, this documentary deifies Bill
Monroe as the founder of bluegrass music and as an all-around swell
guy. Whether the film crosses the line between documentary and
puff piece depends on how you view Monroe’s legacy and personality.
Not even the most hardcore bluegrass crank would argue against
Monroe’s status as progenitor of the music that has become known
as bluegrass. In all ways he was a towering figure, from his physical
presence to his influence on the American musical scene during the past 50 years.

This film does an excellent job detailing Monroe’s importance. In this regard it’s essential viewing for anybody who loves folk, rock, or bluegrass. Where the movie falls flat is its desire to portray Monroe
as a friendly, emotionally accessible father figure. By all accounts he was
stern, stubborn, cheap with band pay, and prone to taking credit for
compositions written by musicians under his employ. It also glosses
over Monroe’s personal and professional foibles. Interviewees, who
include many past band members, have nary a discouraging word to
say, perhaps because he was still alive when the film was made.
Still, the film is well-paced and logical ly structured. And the DVD’s technical quality is certainly better than the original videotape version. The overall sound and picture quality are good enough so viewers can enjoy the film without distraction. By way of bonus features, it includes a live performance from late in Monroe’s career, and even then, Monroe could still “whip that mandolin like a mule” when the spirit moved him.

Anyone who loves bluegrass should have this. And for the sake of having a more balanced picture of a complex man, they should also have a copy of Richard D. Smith’s book Can’t You Hear Me Callin’.