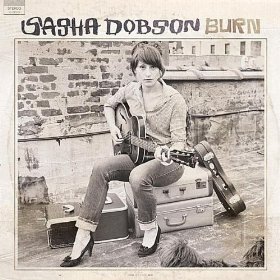 Sasha Dobson is the daughter of a pair of jazz players and has worked as a jazz singer herself. She has also been a staple on the indie-folk music scene in and around New York City, and more recently has been on the road playing guitar and banjo for Norah Jones.

Dobson has been compared to acts like Sheryl Crow and Cat Power but that’s almost a disservice. Her songs are more deeply passionate and less poppy than Crow’s, and she’s more dynamic and rhythmically solid than Power. And she sings circles around both. Dobson plays acoustic and electric on the disc, and in guitarist Steve Elliott she has the perfect match; he displays a confident deliberateness stressing melody over f lash and constructs parts with rich tone, strong vibrato, and an unhurried but impassioned approach, whether on the slightly quirky semi-pop of “Family” or the rhythmic, smoldering, jazz-folk of the title song. Elliott adds lap steel to “Make It Alright” which, like the haunting “Let Me Go,” has echoes of the BoDeans, while the sultry “You’ll Forget Me” does a lot to justify the comparisons of Dobson with Lucinda Williams. Yet Dobson is not a country, jazz, folk or pop artist. She’s a unique, original writer and musician who just seems to write them as she feels them.