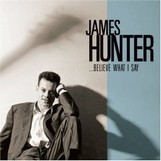 This U.S. release of Hunter’s ’96 U.K.-distributed album shows Hunter honing the skills that would lead to his new album, People Gonna Talk. If you’re familiar with that one, this mix of Sam Cooke, James Brown, Jackie Wilson, and touches of blues won’t surprise you, but will make you smile. His voice captures the essence of all the above singers and more.

“Two Can Play” is funky, vintage R&B. Hunter’s wonderfully funky rhythm guitars set the tone, and his quick, piercing single-note bluesy solo makes a short, but worthwhile appearance. The song establishes the pace for the album. “Let Me Know” is ninth-chord heaven with Hunter doing what he does best on guitar – never being overbearing, but finding a place for everything, and putting everything in its place. The only extended workout, “Don’t Step On It,” lets him show his stuff with lots of bends and double-stops and a cool octave walk-up that would fit nicely on an early-’60s jazz record. Hunter’s playing is tasteful and to-the-point.

Guest appearances of note include Van Morrison helping Hunter sing a version of “Turn On Your Love Light.” It catches fire toward the end, as they trade choruses, and wraps up with Morrison singing along on “Ain’t Nothing You Can Do.” Doris Troy joins in on a fine, gospel-based “Hear Me Calling.” Both singers nail it.

Fans of People Gonna Talk will like this view of the young man as soul singer, and those not familiar with it can start here and work their way forward.