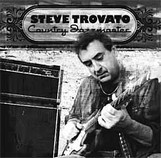 Jerry Reed’s “Guitar Man” is the perfect opener for Steve Trovato’s sophomore release – not only thematically (the song made famous by Elvis is about a “swinging little guitar man”) but stylistically.

His 2001 debut, About Time…, was an eclectic mix, running the gamut from Django to B.B. This time out, the L.A.-based guitarist concentrates on Western swing, which provides an ideal setting for some jazz chops, as well. (The CD’s title doesn’t refer to the model of Fender; it’s an apt description of the genres he’s straddling.)

The instrumental treatment of “Ghost Riders In The Sky” features some hot, uptempo picking, including a nod to Albert Lee’s “beat-and-a-half” delay technique. On the other hand, the beautiful, relaxed arrangement of “I’ll See You In My Dreams” is reminiscent of Chet Atkins.

Steve’s own “Tinhorn Flats” features delicate lick-trading between Trovato and Mike Witcher’s Dobro over a simple, infectious riff that you eventually realize is “Baba O’Riley”!

The sound of Steve’s G&L ASAT permeates the album, although he pulls out his Strat for “Tiger Rag.” Danny Gatton will probably come to mind as you listen to the 10 tracks, which is no coincidence; the CD is dedicated to Gatton, Jimmy Bryant, Albert Lee, and Hank Garland. He never gets as frantic as Gatton would in the same circumstance, though; this is nothing if not tasteful.

Other traits he shares with Gatton are that he relies mainly on covers (the aforementioned “Tinhorn” is the sole original) and doesn’t sing – so the set is mostly instrumental, and the vocal tunes (handled by Garth Phillipsen and Debbie McConoughy) are the most nondescript. The exception is his cover of Phil Baugh’s “Pickers’ Roundup” (or “Country Guitar”), where Trovato impersonates Garland, Atkins, Les Paul, Merle Haggard, Billy Byrd, Duane Eddy over a hoedown beat, with narration by Phillipsen.

For years, Trovato has established a reputation as a guitar teacher, both in the jazz department at USC and via his many instructional books and videos. But perhaps the best compliment this CD earns is that it never sounds academic. It swings, rocks, and two-steps, but never lectures.