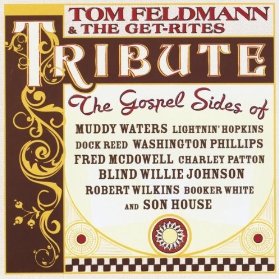 After more than a decade of recording and playing his own original compositions, Tom Feldmann decided it was ﬁnally time to pay homage to the music the ﬁrst inspired him to pick up a guitar. Tribute collects his versions of old-time gospel songs by the likes of Muddy Waters, Blind Willie Johnson, Fred McDowell, Lightnin’ Hopkins, Rev. Robert Wilkins, Bukka White, Son House, and Charley Patton.

Don’t be put off by the term “gospel.” These are far from stale or dreary Sunday-school sing-a-long songs. Both the originals and Feldmann’s covers are soulful and often rollicking tunes accompanied by his deft slide guitar. These are the gospel songs that played a role in the development of the deep blues and ultimately, rock and roll.

And it’s his slide work that ties this album together. He picks on a variety of National resonators – a 1997 Style N, 2007 Western Model D, and a 2010 baritone Tricone. His tone is usually gritty and lowdown, but also can soar and sound almost angelic. His playing carries you back to when this music was the sibling of the blues.