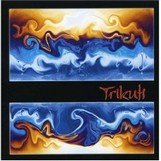 Trikuti is a unique band that goes from jazz to metal and back, not in a song-to-song pattern, but in the space of a few bars. The opener here, “2012,” is a perfect example, starting as a progressive-rock piece with hints of metal. By the time guitarist Scott Seader gets to solo, the song has turned to funk. And just to make sure we don’t get complacent, things end up with a jazz feel. That’s how this whole record moves.

Seader proves a fine soloist and supplies lead vocals, which work well though sometimes stretch him a little too far. That said, the music and songs are so cleverly assembled it’s hard to fault over-singing. Cuts like “The New Jam” let everyone spread out with its funky feel, dazzling bass and guitar solos, and even a guest sax solo that leads into metal-esque guitar. That odd mixture of styles could work against many bands, but the writing here (credited to the entire band) is so tight and natural, though with elements of surprise. While Seader is the main soloist, the entire band gets to shine on most of the cuts. “Running Circles” lets the rhythm section really lay down a bed for Seader. And that’s not always easy given the schizophrenia (the good kind) of many of the songs. The production, by veteran Chris Conway, gives the band the perfect environment to develop the songs with a clean, focused sound.